I’m on the road to South Dakota to join Pheasants Forever in the Aberdeen area for what promises to be... 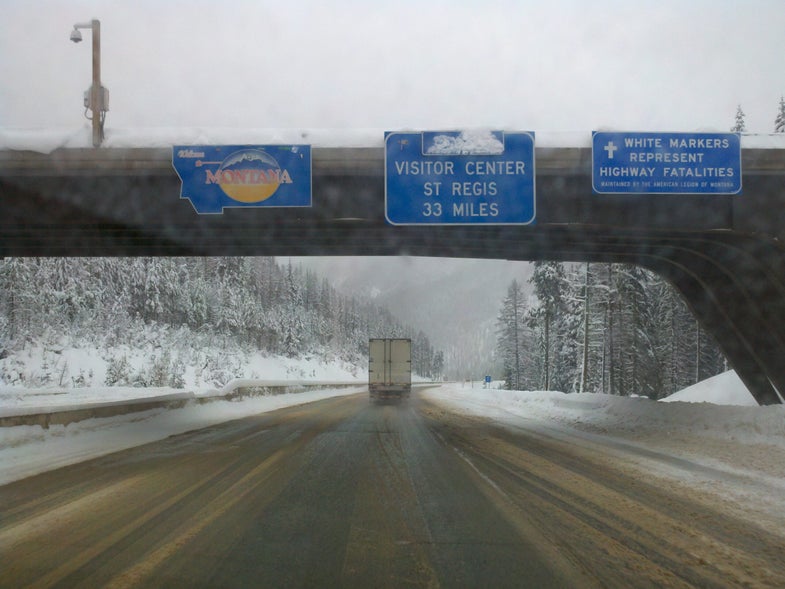 I’m on the road to South Dakota to join Pheasants Forever in the Aberdeen area for what promises to be some fantastic, if cold, hunting. From my place in Washington state it’s more than 1,000 miles of winter driving to reach the pheasant capitol of South Dakota (Aberdeen almost always leads the state’s harvest stats). My dad is joining me for part of the trip and we’ve got the pickup loaded with bags stuffed full of layer upon layer of winter clothing, boots, gear and, of course, Kona is in the back of the pickup.

Before we get to pull the trigger on any ditch parrots, however, we have to make it to SD in one piece. With La Nina in full force in the Pacific Northwest, we’ve been pounded by snowstorms this week and Saturday morning was no exception. Dad seemed a little hesitant before he left home this morning.

“Time to wake up,” he said when I answered the phone at 7:00 a.m. Having stayed up late packing and then, for some reason, deciding it would be a good idea to watch Iron Man 2 again until 2:00 a.m., I wanted to eek out every minute of sleep until my son Tucker would wake me by jumping on my head with snakes and dragons in hand and asking for breakfast or to play. “It’s snowing here and you can’t see anything on the cameras they have set up on passes.”

“Uh, yeah, okay.” My head was fuzzy and my eyes didn’t want to open. Checking the clock, I tried to guess how many more minutes of sleep I could get before Tuck woke.

“Well, we’ll just go slow and take it easy. No big deal. We can always pull over.”

“Okay,” he said, not sounding completely sure. “I’ll leave here in a few minutes and be there in a couple of hours.”

Long-story made short: the worst roads we’ve encountered were in central Washington state; the much-feared mountain passes were bare and wet for the most part and roads were much better than what they were when I last drove them earlier in the week during another storm. That is, they’re good so far, we’re still in Montana–not quite to Missoula; my kick-ass Droid X is enabled with HotSpot technology so I’m literally posting this from the front seat of Dad’s Chevy Silverado!

We’re playing it by ear as to when to stop today. We might stop in Bozeman or Billings tonight before heading on to Rapid City, SD, tomorrow and spending the night at my sister’s place. From there, I will leave dad to spend some quality time with his eldest child (no, really, I didn’t just call my sister old…well, maybe I did…) while I hunt with the PF gang and some other writers. Then it’s over to Tom Dokken’s farm just east of Aberdeen for another day or two of hunting before heading back to sis’s place to take dad and the brother-in-law out to collect some more birds.

Stay tuned for more adventures from the road!