“More than he’d ever wanted anything in his life he wanted the dog to hear one more shot and feel... 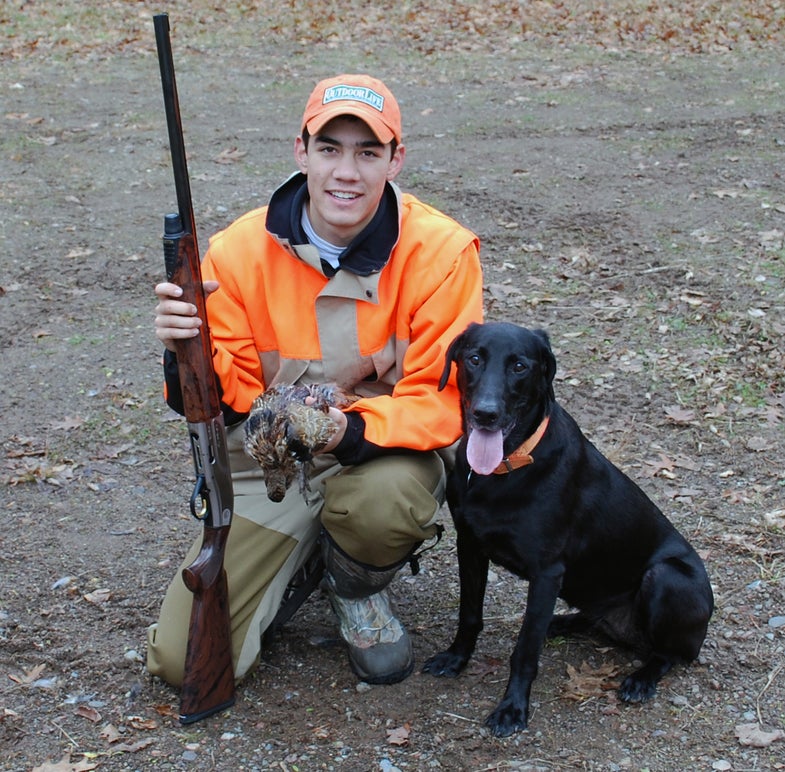 “More than he’d ever wanted anything in his life he wanted the dog to hear one more shot and feel the whirr of one more flush.”
-Gene Hill

Riley and I shared our first real experience as duck hunters on a cold, windy day in North Dakota. Before dawn my dad had taken the two of us out to a point that jutted into a huge pothole, which was really more of a small lake.

Soon the ducks began flying, and from behind us a small flock of buffleheads came cruising overhead at top speed. I stood up, picked out the lead bird fired off a quick shot. The fourth duck from the front flinched and then crash landed into the pothole about 60 yards out. Riley had jumped into the icy water at the shot and was already swimming through the chop as fast as she could after the little duck.

But the wind was blowing out and the bufflehead that I had hit was still very much alive. Soon the current pushed the bird and my dog out toward the middle of the pothole … 80 yards, 100 yards, 120 yards. Riley was gaining on the bird all the time and soon she caught up to him. But just before she could grab him, the duck dove under water and popped up a few yards away.

Riley gave chase again, and the duck dove down again leading my dog around in circles. Sensing the urgency of the situation my dad tried to call Riley off the duck, screaming her name out into the wind. But it was no use, God himself could not have gotten Riley to give up on that retrieve.

On the duck’s fourth dive Riley went underwater too. I gave a quick glance toward my dad but he had his eyes trained on the water. I thought I had just killed my dog.

But about two seconds later Riley popped above the surface with the duck in her mouth. She bucked the wind and waves all the way back to our blind and dropped the bird at our feet.

That was about a decade ago when Riley was just a year old and I was 14. Now Riley, who was once an inexhaustible black flash of energy, has trouble getting up off of the living room floor. She has the classic gray beard of an old lab, and she has bad arthritis in her hips.

For 10 years Riley had been my best bird hunting partner, chasing ducks, pheasants and grouse with me every fall. We were by no means the perfect bird hunting pair. I wasted cases of shotgun shells on missed birds while Riley flushed her fair share of game out of range. Also, she never quite got the hang of sitting still in a duck blind.

But we learned from our mistakes, and we grew up together. One thing I will say about my dog: no one, dog or man, hunted harder. She would literally die for a bird, and there were a few times when my dad, brother or I would have to reign her in for her own safety.

Now we’re faced with having to hold her back again. Riley limped her way through this hunting season, and we only hunted her sparingly for a few hours at a time. Recently a vet told us that she shouldn’t undergo any strenuous exercise. Her drive is still as strong as ever and a glimpse of a shotgun case or the softest quack of a duck call turns her into a puppy all over again. I hope that somehow she’ll recover over the winter and spring and be able to take to the field again next fall.

But her body is failing her, and hunting through another season could be devastating to her health.

When Riley started growing old and slowing down, my dad talked letting her hunt anyway. We would turn her loose for one more season and let her hunt herself to death. At least she would die in the field doing what she lived for. Wouldn’t that be better than giving her a few years of retirement before eventually her arthritis broke her down? After a few years of lounging around the house she would have to be put down at the hands of a veterinarian, in a sterilized room far away from the fields and marshes.

But now that we’re actually faced with the reality of it, I think my dad has backed off of his position. Because even though Riley has all of the heart needed to make it through one final hunting season, I don’t think we do.