He might have only been a Junior Hunter in the competition arena here in the states, but in Afghanistan Sgt.... 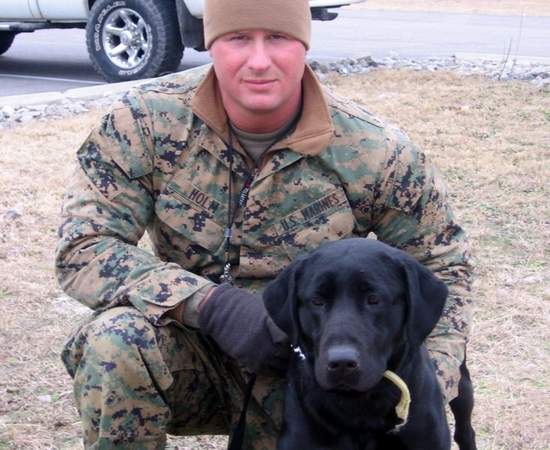 He might have only been a Junior Hunter in the competition arena here in the states, but in Afghanistan Sgt. Bo’s King Cole JH, USMC became, and remains, a champion to the families of a Marine unit — and a hero to all Americans.

This post honors those dogs that have paid the ultimate price for human conflicts. While the majority of those dogs go unknown to most of us, here are the stories of two IED-sniffing canines–Cole and Bingo–that saved the lives of their human handlers. From the DelawareOnline.com comes a story that will, if you’re a dog man, bring tears to your eyes: “Raised in Dover, Dog Dies a Hero in Afghanistan.” ****

It is the tale of a pup known by the call name, Cole. The black Labrador was purchased for $3,000 from a litter bred for field-trial work by Steve Tull.

The duck hunter and dog handler wanted to try his hand at field trials. It’s a VERY competitive arena and is dominated by costly professional trainers whose lives are spent traveling the country with a truck full of dogs. Tull, however, had a friend that would take the pup on for training.

When that friend ended up moving, though, Tull was left with a half-trained dog. He tried to continue the training and hunted Cole, but the dog was bored. Tull faced the fact that he wasn’t doing justice to Cole’s talents and soon placed him with K2 Solutions, a dog-training facility for the military. You can tell Tull loved this dog. He only gave him up after learning of the close bond military handlers and their dogs form, and if you read the entire story you’ll see how he kept track of Cole.

Eventually Cole was paired with Marine Cpl. Brian Holm of Cleveland. The two completed training together, and Cole became Sgt. Cole, USMC. According to the article, tradition holds that Marine dogs hold a rank one level above their handler–which is pretty damn cool, if you ask me, and as it should be!

The two were deployed to Afghanistan but before leaving, Tull tracked down Holm so that he could keep up with the dog that used to sleep on his couch. Tull eventually struck up a friendship with Holm and his wife, who was in Cleveland with their three young sons.

In Afghanistan, Cole put his field breeding to work and soon become top dog within the platoon. Dog and handler became the same team that necessitated the domestication of wolves in the first place–survival. Their tour in Afghanistan was supposed to end in September, but was continued.

On October 15, while on patrol with a three-man unit, Cole was killed in an explosion when an IED was tripped by a nearby insurgent. In his final moment before the blast, Cole looked back at Holm, made eye contact and then, knowing his job, went back to work protecting Holm, his unit and all of us back home.

While Cole died, and was subsequently buried, along that roadside half a world away, Holm will return home to his wife and three boys this month, and the other members of his unit will, too. If the insurgent wouldn’t have detonated the IED on Cole, a Marine following him with a mine detector was next in line.

The story of a one-time owner/handler giving up his dog and a new handler taking on that dog to protect us all is really one you should read in its entirety.

After you read about more fully about Cole’s heroics, watch this short newscast on another black Lab named Bingo.He saved the life of his handler, LCpl. Mason Neff, in Afghanistan when he stepped on an IED, taking the brunt of the explosion.

While losing his left eye, taking shrapnel to his arm and side, Neff, credits Bingo with saving his life and the fact that he still has all of his limbs. “It was actually harder learning that I had lost him than I had lost the eye,” he said.

Such is the relationship of dog and handler. Such are the sacrifices of dogs.