While a new puppy brings much excitement and joy to a household, the addition to the family can also cause... 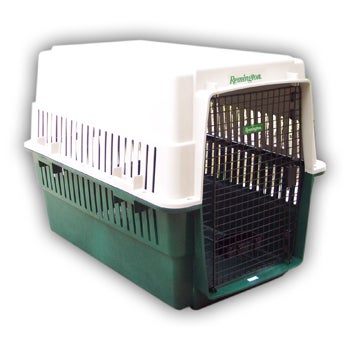 While a new puppy brings much excitement and joy to a household, the addition to the family can also cause some major headaches when it comes to potty training. One of the best methods of keeping your carpets clean and teaching a young pup to eliminate outside is crate training. A crate or kennel can simplify the process for both you and pup and also gives your new family member a safe place to call his own. Here are a few tips to keep in mind when starting the crate-training process:

1. Crate size: The proper crate size is of utmost importance. Dogs don’t like to loose their bodily functions too close to where they sleep. If your crate is too large, pup can go to the bathroom in one end and still sleep at the other end–free and clear of the mess. You could buy two or more crates to accomodate a growing dog, but it’s much easier and cheaper to just partition a larger one and slowly increase the internal, usable, size as needed.

2.Purely positive: The crate is not to be used as place of punishment. The crate should always be a positive experience for the dog. You can put him in there if you just can’t stand to have a rambunctious puppy underfoot at a specific moment, but you shouldn’t punish the dog for a misdeed and then place him in there ala a “time out” for an unruly toddler. Think of the crate as the dog’s den; it’s his home within your home. It’s his safe place. He can go in there whenever he wants to escape household life and relax.

3. Command introduction: Crate training also allows you to teach pup one of his first commands: “Kennel.” This is a command that will be used for the rest of his life. Whether or not you use a crate in your automobile (which you should), the kennel command can be transitioned to any object or place that the dog must enter. To start the training, toss a treat into the crate and when pup’s front feet touch the entrance of the box, say “kennel.” Keep repeating this exercise until pup begins to link entering the crate with the command. Then slowly vary the food reward and eventually eliminate it. If at some point, after the dog has thoroughly learned the command, he doesn’t enter the crate upon being ordered, you’ll want to push him into the box and repeat “kennel” just as he enters (this goes back to never giving an order you’re not in position to enforce).

4. Get on schedule: While the crate will assist you in helping pup learn to hold his bladder/bowels, you must be fair to the pup. By scheduling feedings and removing water at the appropriate time, you will keep pup from having to hold it in to the point of her being forced to soil the crate — this will also eliminate midnight whining and the need to go out as the pup matures. Feed pup early enough so that she can empty out before bed and take her water away around 9 p.m. or earlier so that she has time to process it and empty her bladder.

5. The two hour timetable: As a rule of thumb, a dog can hold it for approximately 2 hours longer than however many months old they are, upto 8 hours. That means an 8-week-old pup can hold it a maximum of four hours. This is a rough timetable and is directly related to the amount of food, water, exercise, sleep and every other imaginable variable the puppy might encounter.

6. Bathroom triggers: Just about everything can trigger a young puppy to go to the bathroom, especially urinating. Playing, sleeping, eating or drinking will all trigger a puppy to go to the bathroom. If at any time your pup engages in these activities, even for just a couple of minutes, pick her up and take her outside so that she can successfully eliminate in the yard. Positive reinforcement works much better than negative. When she wakes up in the morning or after taking a nap, don’t let her walk out of the crate on her own. She WILL have to go to the bathroom and you’d be surprised at how quickly they’ll start going once they clear the threshold of the crate. Pick her up before she has a chance to exit and carry her to her outside spot.

7. Use the same spot: When you do take pup outside, put him down in the same general area. The scents and prior visits will help trigger and teach pup to go. As an added bonus, it will help concentrate bowel movements and make cleaning up easier.

8. Command it: When you put pup down in the grass, repeat a key word (potty, hurry, etc) as she’s about to start. Once she starts going, use that word again and then praise her verbally and excitedly. Soon you’ll be able to just say the word and she’ll get it done.