Too Old to Train?

A common question that I’m often asked is: “Can an older dog be trained?” The short answer is: Yes, an... 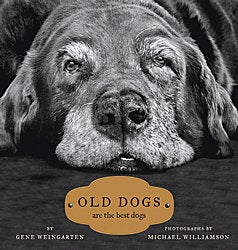 A common question that I’m often asked is: “Can an older dog be trained?”

Of course, there’s a longer answer too, and it pertains to what exactly you’re wanting to train, how long it will take and if the stress that learning will place on the dog is worth it and if the outcome will be satisfactory to your standards.

A dog is never too old to train. They are learning, as are we, how to best adapt to their surroundings every second of every day. All training is, is teaching the dog what is expected of them in a step-wise process using combinations of positive and negative reinforcement. The dog can, and will to the best of its ability, adapt to lead as an advantageous life for himself as possible (think: survival of the fittest and satisfying drives).

Of course, the hard part about training an older dog is that you have to UNtrain all the bad habits that impede the attainment of your goal and then train them for what you have in mind. It will make your training much more difficult and it will take much longer. As we all know, bad habits are hard to break; the longer they’ve persisted, the harder they are to correct.

In some instances, a bad habit might be so engrained as to be near impossible to break, or it might be a genetic tendency or breed-specific issue if you’re trying to fit a round peg into a square hole, so to speak (think: a pit bull gently holding a shot up pheasant).

You also have to consider the stress training will place on the dog. If they’ve been going through life for so long living a particular way and doing certain things and then suddenly you want a completely different animal and expect an extremely different behavior pattern, that dog is going to be very stressed. While all learning involves stress, you as an owner have to decide how much stress to your dog is worth the attainment of your goal.

If you’re just looking to teach it place training or boundary limits, that’s one thing. If you’re looking to teach “hold” and force fetch an elderly dog that has been encouraged to chew and play tug-o-war for a decade, that’s a whole other level of stress.

You have to ask yourself it it’s worth putting the dog through the training process and if it has a reasonably good chance of succeeding — and doing so in time frame that will be of benefit to you and the dog.

Sometimes, especially if it’s a large task that has very stringent standards, if there’s not a natural tendency to complete the task successfully or if habits are so cemented that only high levels of pressure will moderately reverse them, it’s just easier for you and more fair to the elder statesman to just add a new puppy to the family that’s meant to complete those chosen chores from the beginning.