When you add more than one dog to a training or hunting scenario, it can be a benefit or a... 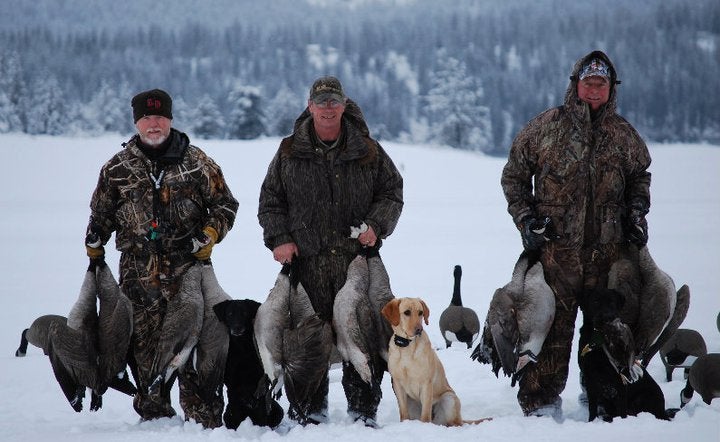 When you add more than one dog to a training or hunting scenario, it can be a benefit or a detriment — it all boils down to how you’ve prepared your dog.

In the retriever world, discipline is key to running more than one dog from a duck blind, while the all-out effort and pure joy a pack of hounds experiences on the hunt can teach a young dog much. Likewise, in the pointer world, the pack mentality surrounding the stake-out chain can embolden a gun- or bird-shy dog; however, discipline kicks in for the pointer when multiple dogs hit the field and backing is required.

If you haven’t prepared your dog for the excitement of the scenario and extreme distractions brought about by other dogs, competition, prey drive and the like, then they’re not going to perform as you might expect — and you’re the only one to blame.If you have two dogs, one of which isn’t a working dog, like I do, you should leave the pet home while you head afield. It isn’t always possible, however, to do so. I often bring my bulldog to the park or field when taking the Lab out to exercise and run some lines or drills.

The problem is: the bulldog isn’t interested in discipline or drills. He likes to disrupt the party by stealing bumpers, play-attacking the Lab as he leaves the line (if you’re into retrievers you can imagine what this does to an initial line), chewing bumpers or just being an annoyance. So, if he does come along, he gets a little time to free run and then he’s tied up or left in the truck while the Lab works. I don’t want his bad habits and play mentality to have an adverse effect on the Lab.

If you have two dogs, even if one is the same breed but isn’t meant to work, consider separating them during training times.

Separation is another important discussion. Especially with young pups, and especially with retrievers, it’s often a good idea to separate your pups for a large part of the day after about three months of age. If you don’t, the two pups might develop such a strong bond as to relegate your importance to that of below the other pup’s.

You want to be the center of that dog’s universe, not the other dog. Good things happen for the pup when you’re pleased — and pleasing you should be the utmost goal in the dog’s life. Another pup that they spend 24-hours a day with can make that much more difficult.

This brings us to the point of not putting a pup in a situation that it’s not ready to experience. If you have two pups, there is much work you can accomplish together, but a majority of the work should be done separately. Allow enough time in your day to work each dog alone, so you have their full attention and can train, repeatedly, what is expected.

As the dogs mature and progress in their training lessons, with basics becoming second nature, you can up the ante by slowly bringing in the other dog as a distraction. As they learn that the same rules apply with another dog present just the same as they did when they were alone, you can begin to work both dogs together.

Putting pups, or mature dogs that have worked very little with other dogs, into a scenario that includes other dogs and lots of energy (i.e., hunting or an exciting training/test scene) has the potential to make for a very long day at best, create bad habits in your dog or to set your dog up for failure.

Your dog will only do what you’ve allowed and trained it to do. If you take a trial-by-fire approach with your dog, don’t be surprised if you get burned.