When you’re problem solving training issues, you have to put the matter into context and then break it down to... 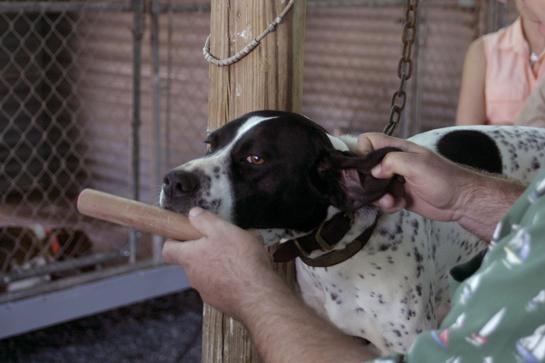 When you’re problem solving training issues, you have to put the matter into context and then break it down to the smallest, core concern and build forward from there. Without rebuilding the training foundation, the issue isn’t really solved … and you can’t solve the issue without putting it into context.

It doesn’t matter if you’re working on blind retrieves with a retriever, the whoa post with a pointer, force fetch with a versatile breed or any other concept and training of any breed, you have to look at the situation, dog and your own behavior and figure out what the underlying issues are mentally for the dog and how you can achieve success in the most simple terms and then build upon that success.

For instance, when Kona’s trailing problem reared its ugly, frustrating head at the NAHRA tests this spring, it seemed like a simple fix. On one hand it was an easy fix, but what I thought was the issue was just the tip of the iceberg.

If you read this blog much, you might recall that Kona failed the trailing portion of the tests. Triple marked retrieves, blinds, quartering, flushing and sitting to flush were all handled, but using his nose to follow a ground-laid scent trail has just killed us. Multiple times.

This seemingly simple test has become complicated and goes way beyond Kona using his nose and is related to his mental focus. The first issue was getting him to use and follow his nose on command. That was quickly remedied. The second problem came about as a situational issue; when he started to follow the scent, he kept stopping and would look back and wait for me to follow. With a little work, that too was quickly fixed.

I thought the problem would be put to bed with those few weeks of training. It turns out it’s much deeper. In the excitement of the test atmosphere, preceding actions (like quarter and flush) and a coming to the line all play a role in unraveling Kona on a very simple, natural skill that he can perform. And it all boils down to mental focus and situation.

Kona gets so spun up, or excited, at a test and has gone to the line so many times in training and testing scenarios to retrieve multiple marks and blinds that during the trailing test he continues coming to the line looking for gunners and where potential birds might fall from that he can’t focus on using his nose to follow a long trail. Rather, he doesn’t focus. He can do it.

The challenge is to recreate that energy in group work and force him to focus mentally on the task at hand regardless of what’s happening around him and what might happen and instead concentrate on what I’m telling him to do. With lots of group work and diversionary setups (creating that excitement of retrieving and forward momentum within him) and then pulling him in and forcing him to focus on the task of trailing immediately following a hard-charging retrieve or pulling him off a mark and making him trail will help focus him mentally. And, hopefully, at our next test it won’t be an issue and he can title out.

That breaking down to the core issue, however, is the point I’m trying to make with this post. If you’re having training or behavioral problems, break it down to its most base nucleus and look at the situation surrounding it, the dog’s mental state, cue or emotions you’re giving the dog, and figure out a plan of action that begins to resolve that setback with the most simple and smallest positive step forward. Build upon that success with baby steps until you solve the bigger problem plaguing you and your dog.