The leash, e-collar, your voice and even just your body posture can convey a command and pleasure or displeasure to... 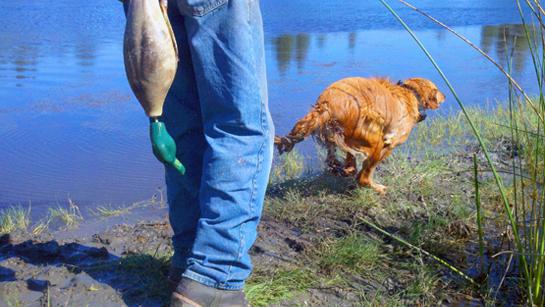 The leash, e-collar, your voice and even just your body posture can convey a command and pleasure or displeasure to your dog. While a leash snap uses kinetic energy to relay a message to your pup, there’s another type of energy that no tool can control, help, change or use. But it’s real and your dog can pick up on it, feel it and will act upon it.

That energy is psychological energy. It might sound a bit like some new-age healing-crystal mumbo jumbo, but it’s not. I’ve experienced it and you probably have too. Here’s the best cure for the problem.
One way you can pick up on this phenomenon is if your dog performs a skill in the practice yard or during training sessions routinely, but when the chips are down at a test, trial or in the hunting field, he comes unwound and commits a bone-headed mistake. That comes with a caveat, however.

Don’t mistake his error with lack of training. If you haven’t trained the concept thoroughly enough in multiple areas with distractions to the point of learned behavior and conditioned response, then it’s not the same thing.

What I’m talking about is a concept that you, the handler, are worried about. Will he bump that covey? Is he going to break? Will he deliver the bird? Will he go when sent? Will he come back? If you’re doubting that your dog will perform the action, then your body language, tone of voice, confidence and overall demeanor will all play a role in influencing the dog and ultimately, more than likely, causing what you dread to come to fruition.

For example, if you’ll remember Kona had trouble with trailing during tests this past spring. We worked on the independent behavior of trailing beginning with a cue word and built his confidence working alone at a distance (as opposed to me trailing as in a hunting scenario). He did great and quickly picked it up. However, at tests it was still a 50-50 proposition as to whether or not he’d follow the scent trail to conclusion and find a bird.

Working with pro trainer Dan Hosford, we laid trails for Kona in training and he did great; even being able to come off a shot flyer and then follow a master-level trail before returning to the point of origin and picking up the fresh-killed bird from memory.

“I don’t think that dog has a problem with trails, I think it’s you,” he said.

My anxiety at Kona’s ability to follow a trail when it counted only caused me to lose focus. In training I was relaxed because it was a training session, but at tests, even though I tried my best to remain outwardly calm and act as if nothing was wrong, it was still there and played a role.

A friend perhaps had a similar issue with his pup at a test. On blinds the dog would no-go (not leave the line on command for a retrieve they didn’t see drop), but it only happened at tests. He was eliminated one day and went back the next day and setup the same blind and the dog performed flawlessly.

“The test must just freak her out and make her stress,” he said.

If I had to guess, however, I’d lay my bet on the dog picking up on his internal turmoil.

What’s the best way to combat this problem?

As with most things when it comes to dogs, the fix is usually simple. Train for the desired skill set until both you and the dog are confident of consistent success. That’s it.

If you know that your dog is going to perform a task to the point that it’s actually a shock to you when they don’t, then you can be fairly confident that it’s lack of training in similar surroundings or some other environmental/situational issue.

Psychological and mental energy; it’s not just for hippies.