How To Cook Ducks in the Blind

Some of the great things about duck hunting are that you don’t have to worry about scent control, you get... 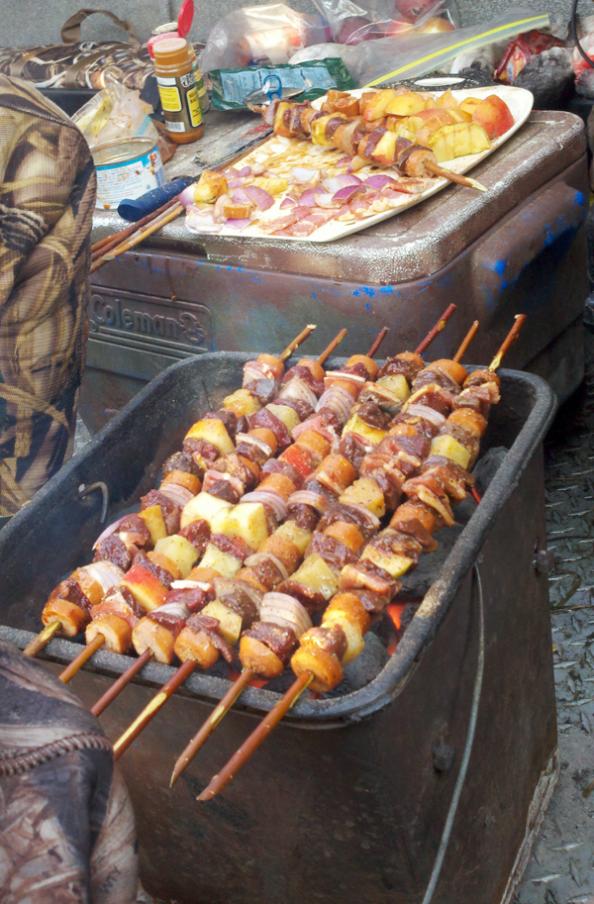 Some of the great things about duck hunting are that you don’t have to worry about scent control, you get to shoot more than once a season (multiple times a day, especially if you miss as often as I do) and with the exception of when birds are circling, you can talk and joke with blind mates.

That whole scent-control point leads to some interesting duck-blind shenanigans. One of which is creative breakfast cooking.

Bacon and eggs, hashbrowns, omelets and the like are often prepared using small, portable stoves. While hunting Meseberg Adventures Duck Taxi on Potholes Reservoir in Central Washington state (near my hometown of Ephrata, Wash.) we experienced a version of this idea. But instead of breakfast we had more of a brunch – duck kabobs – and our fresh-killed ducks, prepared over charcoal were the staple of the meal.

According to owner Mike Meseberg and the Duck Taxi website, here’s how the famous duck kabobs evolved:

“Dave and Mike Meseberg were hunting ducks one cold December morning in 1974. It all started when we realized we had forgotten our lunch. We ended up breasting a duck, cutting into small pieces and threaded on a green willow stick and placed it over the fire bucket. Hence, the birth of the “Duck Kabob.”  The duck kabob has evolved. Now we use marinated duck meat, pineapple, peppers, apples, bacon, pieces of cheddar wurst, and if you are lucky you might get some shrimp. Many other guides in the area have tried to duplicate the recipe with no avail.”

I don’t know if it was the fact that a hot meal in 18-degree weather made the kabobs taste incredible or if it was because we used about as fresh-killed meat as possible without putting a flapping bird over hot coals, but incredible they were.

Anyone else have a favorite duck-blind recipe?