After about a 12-hour delay in Anchorage, Ramsey Russell of Getducks.com and I made it to St. Paul Island, Alaska,... 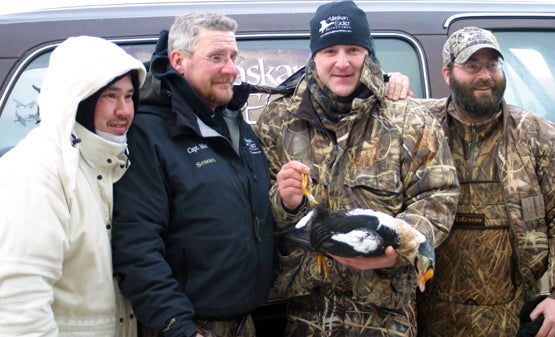 After about a 12-hour delay in Anchorage, Ramsey Russell of Getducks.com and I made it to St. Paul Island, Alaska, at 2:00 a.m. and met up with Moe Neale and Jeff Wasley of Alaskan Eider Outfitters. That’s the good part. The bad part is that my bag with all my clothing, my cooler and my Benelli Super Vinci were still in Anchorage.

The amazing part of this trip took place the next morning when campmate Trevor Peterson of Bethell, Alaska, who is here with his father Greg, of Helena, Montana, came back to the house — with the first pull of the trigger he dropped a king eider. But not just any king — a banded king!

To put this into perspective, collecting a banded king eider is like finding the proverbial needle in a haystack, killing a 200-plus inch whitetail buck or hitting a Powerball lottery jackpot.

In fact, when we arrived in the wee hours of the dark morning, Russell joked with Neale and Wasley that he was fully expecting them to guide us to a banded king. Both laughed and said it would never happen; that there aren’t any, or at least that they’ve never seen one or even heard of one.

Then what happens? Peterson pulls up with his guide, Dustin Jones, on a four-wheeler with a banded king — can anyone say ironic?

It was Peterson’s first day to hunt and while sitting on St. Paul Island’s shoreline rocks in the pre-shooting-hour light, he just had to watch king eider after king eider pass by until Jones told him it was legal to shoot. Moments later a pair of drake kings zipped by and one of them met a load of Hevi-Shot #2s. It crumpled. Peterson had his first king eider and a band.

The king eider was banded right here on St. Paul Island on March 14, 1996 as an adult. Here’s exactly how special this bird is: from 1962 to 2011 only 591 king eiders have been banded. Of those, only nine bands have been collected. Peterson’s makes 10.