I had a life-flashing-before-my-eyes moment at a sportsman’s show last week when I nearly lost my dog Kona for good.... 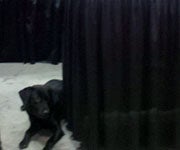 I had a life-flashing-before-my-eyes moment at a sportsman’s show last week when I nearly lost my dog Kona for good. I worked this show with him last year, and since Kona was so adept at attracting people to our booth, we were asked to do it again.

This year, however, Kona wandered away from the booth. My mind could only focus on three things during the time he went missing: every moment I’ve spent with him from when he was six weeks old (he is 7 and a half-years-old now), how he wasn’t wearing an ID on his collar and the microchip under his skin had an old address and phone number on it.

It all started when I took a bathroom break. I put Kona on sit and told my buddy Ray to watch him; that I’d be back in a few. Kona wasn’t on a leash – he’s done these shows before and is a very obedient dog in and out of the hunting field. However, Kona had other ideas this year. He waited for Ray to look away for a second and then took off after me. The people at the booth at the end of our aisle said they saw him zip by in the direction of the bathrooms. With thousands of people wandering the packed corridors, it didn’t take too long for him to get confused, lost, and I imagine, panicked.

And that was it. Within seconds he was gone. Ray met me halfway down our aisle.

The panic I experienced was almost like losing a child (not that I’ve done that…). My mind raced with possibilities of where Kona could be; what might or might not have happened to him; if someone would turn him in or if they would just walk off with a well-trained hunting dog; and if he was in a panicked state of mind. As my mind and heart raced faster, my stomach sank and twisted from thoughts of all the bad things that could happen to him.

I learned a valuable lesson from this situation: this was, with a few exceptions, almost completely avoidable. A set of dog tags on the collar and an updated microchip would get him home from anyone kind enough to want to return him. That failure of responsibility cut deep. It wasn’t Kona’s fault; the blame rested squarely on my shoulders.

Kona is back home now. I’m working on updating his microchip and looking at some nice leather collars with brass nameplates. I do think I’ll take the advice of pro trainer Sharon Potter and put “needs medication” on the plate along with my phone number, instead of, or in addition to his name. This message can help get your dog back faster because someone of dubious intent might not want a dog that needs regular medication and/or the concern for the dog’s health might cause them to reach out a little sooner.