Yes, once again, truth is stranger than fiction in the canine world. In the “weird dog news” category, I’ve seen... 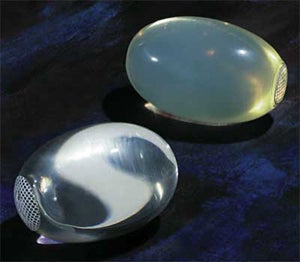 Yes, once again, truth is stranger than fiction in the canine world. In the “weird dog news” category, I’ve seen stories about DNA testing of poop, canine-specific brothels, concerts put on for and by dogs, ridiculous clothing and people that dye their dog to look like tigers and pandas.

Even the President and GOP front runner are part of the whacked-out world of canine news these days, as both Republican and Democrat strategists bash the other side about their treatment of canines (Romney for putting his crated dog on the roof of his car 30 years ago during a long road trip and Obama for eating dog while living abroad as a youngster; makes me want to vote for their dogs instead of the men we’re saddled with).

But, this latest headline from Yahoo! might just take the cake: “Meet the man who sells testicular implants for dogs, ‘People thought I was nuts.”

Indeed, someone is a nut short, and it ain’t the dog — he’s missing two.

Apparently, if your dog has been neutered, Gregg Miller, inventor of Neuticals, will sell you a pair of testicles for your appendage-challenged pooch. But it’s not as easy as ordering a simple bag of marbles. No, first you need to decide between the “more lifelike” silicone version (which goes for up to $600; want to be on the testing panel for future materials?) or the “easily detected though more affordable” rigid polypropylene version (about $150; just pray they don’t smell like bacon). After that, you have to submit the age, size, weight, etc of your dog so that a better match can be made. (This really makes me want to visit a dog park with a Jack Russell that’s been outfitted with a pair fitted for a Great Dane).

Even putting the anthropromorphism aside, I can’t fathom that people would actually pay up to $600 for fake testicles…for their dog! But apparently people really will buy anything. Miller has sold more than 500,000 pairs in all 50 states.

While I’m in the “you’re nuts” category, apparently I really need to put my thinking cap on. Canine blow-up dolls for the sexually frustrated pooch, anyone? Breast implants for dried up bitches that miss that nursing feeling? Anyone? Anyone? C’mon, Gun Doggers, there’s got to be something we can come up with…