I was driving down Interstate 90 when my cell phone rang. Caller ID showed that it was the vet clinic.... 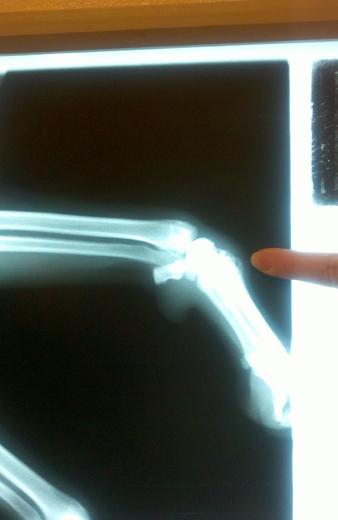 I was driving down Interstate 90 when my cell phone rang. Caller ID showed that it was the vet clinic. I answered the phone and heard the vet’s voice. As she began to speak, I braced myself for the worst-a confirmation of bone cancer. I had to exit the freeway and take a deep breath. Nearly three days of living with a death sentence hanging over my head would come down to a few spoken words.

These were the words I heard: “The radiologist doesn’t believe it’s bone cancer. Instead, he thinks it degenerative joint disease.”

Sitting in the gas station of an Exxon parking lot, I barely heard the diagnosis. My mind stuck on “it’s not bone cancer.” After a minute of listening to the doctor ramble, I had to have her start over, cover degenerative joint disease in general and the immediate and long-term treatment options.

Put simply, degenerative joint disease is arthritis, an arthritis that worsens quickly and that has a nasty habit of creating a vicious cycle. First the lameness and pain set in as the cartilage wears away, then the dog stops exercising as much, which only causes the muscle support around the joint to weaken. With less muscle support, the wearing away and trauma to the joint is exacerbated causing the dog to work the muscles less … and the cycle continues until crippling lameness sets in.

I didn’t care, all I knew is that my dog wasn’t going to die in the next couple of weeks or months.

Now, it’s far from an idea situation, but it’s not a death sentence. Likely, it’ll be a managed downhill slide; a weighing of physical activity to determine a threshold that causes the condition to be exacerbated and the joint to swell and cause pain. Then Kona will have to sit on the sidelines, take anti-inflammatory (NSAIDS) and pain meds and rest until he heals. It’s likely to worsen quickly. That doesn’t mean he’s done in the field, however.

While he’s healing well right now-no more limp and only a slightly swollen ankle-I’ll continue to rest him and slowly work him back into an exercise program. We’ll just have to determine the threshold of activity based up on an ever-increasing workload, taking care not to push it too much. I’m guess his upland hunting days are numbered (at the peak of our activity, I would routinely go 8 to 10 miles, meaning he was covering 16 to 30 miles over rough, hard terrain), but I’m hoping that he can continue waterfowl hunting for awhile.

Unlike upland hunting, which features routine pounding on leg joints, waterfowl hunting is conducted with the dog sitting for periods of time followed by swimming, which puts no weight on the joint.

Of course, this is all to be determined in the future and how he responds to treatment and how fast the cartilage deteriorates. It will be a moving target for some time, but right now I’m optimistic-the opposite of my mood two weeks ago.

Interestingly, the likely problem was caused by our hard hunting over the last few years. The radiologist, using just x-rays of the leg, suspected trauma to the joint. Indeed, if you’ve followed the Gun Dog blog for awhile now, you’ll remember that Kona had a severe sprain of his right ankle last year. Odds are, that trauma was either caused then or lingered from pounding the upland fields of South Dakota, Montana, Kansas, etc., over the last couple of seasons. The damage was done to the soft tissue, never healed or has slowly degenerated. While working him out at the pros just before the issue arose, he likely stepped in a gopher hole or injured it somehow just running routine memory blinds.

I can accept a career-limiting fate when it takes place doing what a dog was born, bred and trained to do. Cancer isn’t fair to anyone, human or canine.

Either way, I’m just happy to have my hunting buddy for awhile longer. He might only be able to perform in the field for another season, a few more or maybe only one or two more outings, but I don’t have to put him down. As of now, I can work on how to keep him as pain-free as possible, healthy, happy and doing what he loves for as long as he can. When that time comes to an end, he’ll likely curl up on the bed next to me and live the good life. For many more years, I can only hope.