The Worst Words: “Your Dog Has Cancer” 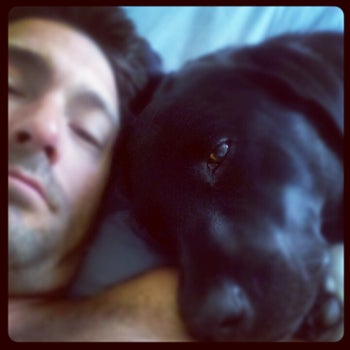 It’s nearly midnight, Sept. 11. I choose not to mourn on this day as it’s my son’s birthday-he turned 6 years old. Despite that vow, I lay in bed, tears running from my eyes as Kona, my 8-year-old Lab, lays beside me in the full-sized bed; his usual spot since my wife and I separated and finalized our divorce. His breathing labored, or maybe it’s my imagination run amok, hearing things that aren’t really there, not yet anyway.

The reality is, if the veterinarian’s hunch is correct, something which will need to be confirmed with a radiologist and further tests, then Kona is suffering from Canine Osteosarcoma, or bone cancer. Even with aggressive treatment, the vast majority of dogs only live 6 months to a year. Likely, just as the cool air of fall encroaches and upland seasons open, giving way to a two-year-record waterfowl hatch, I will have to make the heart-wrenching decision to end Kona’s life.
**
CHANGING BEHAVIOR**
It started with lethargy; nothing serious, he’s always been a laid back dog in the house-I chalked it up to boredom. The lack of stamina I first attributed to a dearth of training. Then last week he just didn’t seem right. He tired much more quickly than he should have, even if it was a little warm and he was out of shape; once even laying down at heel upon returning from picking a bumper up on the “T drill.”

I began to wonder if the switch from Premium Performance to a senior 7-year-plus formula had something to do with it. It was possible, but could also be attributed to an older dog not wanting to do pile work-although that seemed less likely to me. I planned to change his diet back to the performance blend.

Then, last Friday, while hand-throwing marks and running him on some memories, I noticed the slightest change in Kona’s gait. The insignificant head bob was so small that I couldn’t tell if it was the right or left front leg that was bothering him. By Sunday, his right “wrist” would be swollen and he would have a noticeable limp. I waited to see if more rest on Monday might help. It didn’t, so I took him to the vet.

X-rays revealed points of concern to the vet, who wanted to send the film off for consultation by the radiologist. She said they would probably recommend chest x-rays (because apparently the cancer metastasizes in the lungs, which would explain Kona’s irritating hack on occasion) and would probably come back with two or three possibilities; cancer being the big one.

It took a few moments to realize that she was preparing me for a likely diagnosis. I left the office in a haze, trying to figure out how I had gone from an imagined worst-case scenario of a torn ligament to my dog dying. My son, not quite grasping the gravity of the situation, began to inspect Kona himself before finally asking: “Is Kona sick, daddy?”

“Well, can we make him better?”

With my two charges loaded up in the SUV, I started the rig. Or tried to. It just made a noise like that of a faulty starter; not that I actually know the sound, but the greasy dude at the nearby service center said that’s likely what it was.

My life has officially become a country song. Divorced. Broken-down rig. Dying dog. The self pity is running deep tonight as I listen to Kona’s seemingly forced breathing. I know I’ve made mistakes in life, but seriously karma, enough is enough! A man’s dog should be off limits.

While we wait for the radiologist to give his or her evaluation, the vet has Kona on pain meds to ease the hurting in his right front leg and to make him more comfortable. Something that will likely be the primary means of treatment until it’s time to end the suffering for good.

I lay here in bed, Kona beside me. Only 8 years old. We were counting on at least one or two more pheasant seasons together and more than that in the duck blind before he would retire to the leisure life. Reaching over to stroke his soft black fur, I can only think of all of our adventures together in places like Oklahoma and New Jersey, South Dakota and Montana.

And then, as if karma means to remind me not to get too comfortable in life or even my own thoughts, all I can imagine is how I’ve failed him; failed to take advantage of training time over the last couple of years, failed to finish his senior title in NAHRA or finished in HRC, failed to hunt more as life’s issues encroached, failed to give him what his talent, genetics, disposition and desire to please were cultivated for and what he deserved.

I feel as though I’ve failed. Not a hunt test title or a magical number of days afield, but him. Logically I know he doesn’t care, but that doesn’t change the impending sense of loss I’m feeling.

Stay tuned for more self-loathing and sadness as this saga continues. As a writer, communicating is a form of therapy. Maybe something good will come out of it or maybe karma will bitch slap me again. I don’t know. I just miss my dog already.