Alaska, there’s no other place like it. The immense scope and size of the land, water and wildlife never ceases... 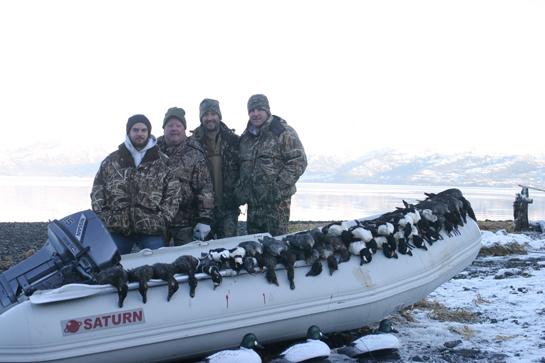 Alaska, there’s no other place like it. The immense scope and size of the land, water and wildlife never ceases to amaze me. Jagged mountains, home to bears, sheep and goats, rise out of seas, oceans, sounds and fjords, a place where marine life thrives in the deep, cold waters. The sheer beauty of the landscape and variety of wildlife should be witnessed by every outdoorsman at one point in life.

My latest trip to Alaska took me to Prince William Sound, southeast of Anchorage, in pursuit of harlequins primarily, but also for Barrow’s and common goldeneyes, buffleheads, surf and white-wing scoters, mallards and even black bears.

With Trevor Peterson, who I met last year on St. Paul Island while chasing king eiders, his father and another father-son team, we lived in a one-room Forest Service cabin for five nights. By day we pass-shot ducks entering and leaving the lagoon our cabin was built next to or cruised up and down the shoreline of the sound searching them out.

My first goal was to take my limit of harlequin, which is four for non-residents, and then go for other species. I’m happy to report that during the second afternoon, while cruising the shoreline in a 12-foot multi-chambered inflatable boat, I was able to drop some prime specimens.

While harlequins were to be found, Prince William Sound is definitely Barrow’s goldeneye territory. Hundreds of them passed by daily, easily identified by their white bodies and whistling wings, the sound of which could be heard at times more than a minute before you could see them. If you’ve ever wanted a trophy Barrow’s, this is the place to go.

To a lesser degree, we were able to knock down a couple common goldeneye, a single mallard (their intelligence compared to the sea and diving ducks was amazing), a few white-wing scoters and we encountered a single flock of surf scoters as they buzzed our decoys. There was even a small black bear taken from a mountain valley across the lagoon from our cabin.

It was a great trip, and doing it yourself is always a rewarding experience when it pans out. If you happen to set up a hunt from one of the remote Forest Service cabins, there were a couple of things we wished would have brought more of: clean drinking water and more shells. We were able to make both stretch, but if we would have been weathered in at all, we would have had to have hiked to a nearby freshwater spring.