It seems the story of the [banded king eider](/blogs/gun-dogs/2012/01/ alaskan-hunter-takes-extremely-rare-banded-king-eider) that I wrote about last January while hunting on Alaska’s... 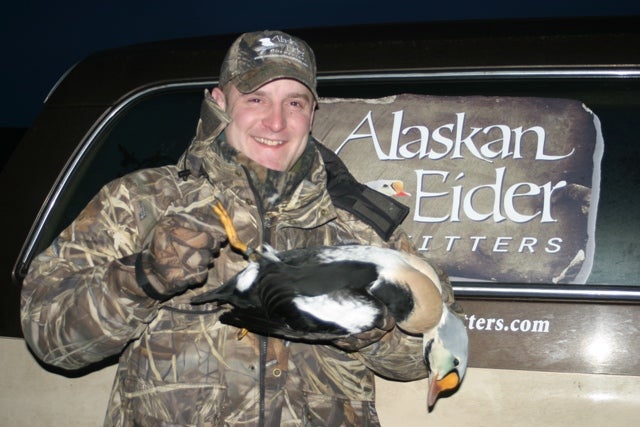 It seems the story of the [banded king eider](/blogs/gun-dogs/2012/01/ alaskan-hunter-takes-extremely-rare-banded-king-eider) that I wrote about last January while hunting on Alaska’s St. Paul Island just won’t die. Apparently it has sparked a bit of a tiff between two Alaska newspapers and involves a barefoot hippie in San Francisco.

Only a story from the outdoors could bring such diverse and contrasting opinions together. In the latest turn of events, [Alaska Dispatch reporter Craig Medred](http:// www.alaskadispatch.com/article/survival-single-oiled-king-eider-proves-next-nothing) takes shots at a story from [the Anchorage Daily News](http://www.adn.com/2012/10/14/2660734/ king-eider-dies-16-years-after.htm) (for whom he used to work) and offers up his perspective on misrepresented quotes from the sources in the story, as well as his opinion of what should have happened with the heavily oiled bird that survived a spill, was rehabilitated, banded and released, and eventually shot by Trevor Peterson that first morning on St. Paul.
The original ADN piece is a feel-good, bunny-hugging story that smacks of an anti-hunting bias. It cites the survival of Peterson’s king eider as evidence that the work and expense of saving sea life after an oil spill is well worth the cost.

Medred, a long-time Alaskan outdoors reporter, contends that instead of spending a boatload of money saving the birds, they should have just been shot on sight instead of being put through the stress of rescue effort. Nobody knows how much the rescue and rehab of 155 king eiders cost, other than one source who says, “a lot.” That’s undeniable given St. Paul’s remoteness.

What Medred doesn’t say in his article is this: whose money was it? If it was taxpayer money, he has a valid point. If it was private money gathered by a bunch of barefoot hippies in the whacky world of San Fran, then I don’t really care; it’s better spent saving the beautiful king eider than on tie-dye shirts, hemp pants, and left-handed cigarettes.

Here’s where the barefoot dude in San Francisco comes in. This guy emailed Medred, claiming to have helped rehab the bird Peterson shot 16 years earlier.

Here’s how I see it: Peterson’s king eider survived the spill, and went on to reproduce for another 16 years. It lends some credence to the efforts and costs of post-spill animal rescues. In that context, Medred’s conclusion that the birds should have been shot in the oily, spill-slick waters seems ridiculous. But if you step back, and remove emotion from the equation (which, as he points out, litters the ADN piece and drives the barefoot dude in California, as well as others hoping to make themselves feel better), it’s not. Indeed, if taxpayer money were used for the rescue effort, I’d say it would be the more prudent course of action.

HUNTER vs SUBSISTENCE MORTALITY
While simply shooting 155 king eiders struggling in an oil slick might seem crazy, those birds are just a drop in the ecological bucket. Their loss wouldn’t even make a blip on the radar. Consider that the 30 annual guests of Alaskan Eider Outfitters can take at least 120 kings per season (non-residents are limited to four eiders per season; residents can take more). There is another outfitter on the island that supposedly runs more hunters, so each season approximately 250 kings can be taken between the two camps. But, really, that’s nothing.

When Peterson and I hunted St. Paul, it was the last week of the season, which ended Jan. 22. As we left, the encroaching sea ice was a scant 10 miles or so from the island and would have it locked up until spring within a week.

With the recreational-hunting season closed, the subsistence season opened for the island’s Aleut population. Those taking part in the hunt have no limits, and it’s common practice for several gunners to sit along the edge of any pocket of open water in the ice and to blast incoming king eiders. A discussion with one of the Aleuts revealed that he and a friend or two had taken as many as 65 king eiders. In a single day.

Medred’s right. Those 155 birds would never have been missed by man or Mother Nature. However, the fact that at least Peterson’s banded bird survived and reproduced for another 16 years, provides some evidence that rescue efforts work to one degree or another. And, if barefoot, bunny-hugging hippies want to pay for that, great! That just means more king eiders out there for you and me to shoot every December and January.