How to Find a Lost Dog: Turkey-Calling Kid Saves Lab

A week after being lost in a snowstorm, Maggie, a 17-year-old Lab/springer mix was found by sixth grader Austin Gibson.... 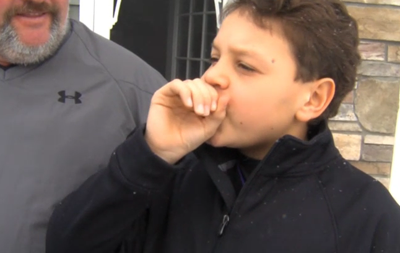 A week after being lost in a snowstorm, Maggie, a 17-year-old Lab/springer mix was found by sixth grader Austin Gibson. It’s a nice story of redemption and reunion, one that any dog owner can relate to and appreciate.

I can sympathize with the dog’s owner after nearly losing Kona at a sportsman’s show last year; that dread and panic that washes over you, and then frantic searching and hopelessness as areas to look and chances of rescue both dwindle. The fact that the dog was lost in a snowstorm and was essentially geriatric, only pulls harder at the heartstrings; the dog’s physical shortcomings somehow make it harder to accept and the bitter weather somehow makes it seem like the dog is suffering more.

While losing a dog in a snowstorm sucks, there were a couple of things that jumped out at me watching this video:

First, Maggie was rescued when Gibson was (and I love this line) “sitting on a snow bank practicing his turkey calls” (how many kids have you heard of practicing Playstation while sitting on a snow bank?). By all accounts, Maggie is nearly deaf and can’t hear when her owner is calling to her from a short distance. Turkey calls however, are higher pitched and carry farther. Dogs hear at a higher frequency than humans. I’m betting that Maggie could hear the calls in her makeshift den for just that reason. It’s something to keep in mind when you’re looking for a dog; high-pitched whistles and calls could be more effective.

Second, how Maggie survived in the cold and snow for days on end. I’ve said before that dogs are well equipped for the cold; that heat is far more dangerous to a dog than cold weather. When Gibson found Maggie, she emerged from a snow bank. Dogs can keep warm in almost anything besides submersion in cold water. Their bodies have evolved to do so. That doesn’t mean you don’t provide shelter for you outdoor dog or forego a neoprene vest, but it’s something to keep in mind when you (or your spouse) is worried about an outdoor dog – rarely are they actually in any danger provided they have adequate shelter.