I just returned from Seattle after visiting the Eddie Bauer headquarters and getting the low down on their new Sport... 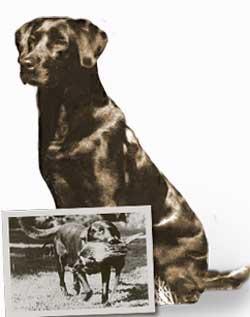 I just returned from Seattle after visiting the Eddie Bauer headquarters and getting the low down on their new Sport Shop line of clothing, which focuses primarily on upland hunting and shooting sports (for now).

For anyone younger than 35 years old, Eddie Bauer is probably more synonymous with suburban malls than with outdoor sports and clothing. However, Eddie Bauer started as an outfitter business for hunters and anglers, with Bauer owning the first U.S. patent for a goose-down coat. Beyond making coats, sleeping bags and other gear for adventurous travelers, Bauer was a dog man. And a serious one at that.

According to Colin Berg, the brand historian at the company, a couple of Bauer’s buddies returned from a duck hunt in Canada and couldn’t stop talking about this dog that would repeatedly jump off a cliff, into the pounding surf, to retrieve their waterfowl. Bauer apparently didn’t believe the boasting so ventured up to British Columbia to see for himself. Witnessing the drive and ability of the dog, Bauer bought it for $65 and brought the male black Lab back home to Seattle in 1930. The aptly, if unoriginally, named “Blackie” was the first registered black Lab brought into Washington state.

Blackie turned Bauer into a Lab lover for the rest of his life. Berg said that when Bauer saw the power, drive and trainability of the Lab, all other breeds were foresworn.

Bauer not only got into the hunting and training of Labs, he started breeding the dogs and had all sorts of theories. Berg mentioned an unpublished book in which Bauer jotted down notes and theories on breeding (that’s a book I’d love to get a hold of for a few hours). If the quote in the book The Legend of Eddie Bauer is any indication, I’m betting Bauer had some darn good ideas:
“He was a student of the game,” recalled Eddie Dewitt, who with his wife, Kay, raised and trained many dogs in the Wanapum line for Ed. “He could look at a dog’s pedigree and prove to you why that pedigree was good because it had all the top females in the country,” remembered Kay Dewitt.
If you’ve been reading Gun Dogs long, you might remember the post about the bottom-line theory I wrote about last year [URL: https://www.outdoorlife.com/blogs/gun-dogs/2011/07/understand-pedigree-bottom-line-theory-you-pick-your-next-pup/].

At any rate, Bauer’s dog prowess led him to be named the 1974 “Retriever Breeder of the Year” by the Professional Retriever Trainers Association.

Some interesting facts of Bauer and his Labs gleaned from the book and archive tour:
• The offspring of Bauer’s dog, Dart of Netley Creek, accumulated the most points in the 1974 Open and Amateur All Age Competition.
• Dart’s mating with Super Chief, which was owned by Louise and August Belmont (yes, those Belmonts, of Belmont Raceway), has produced some of the top Lab lines of all time – many of which are still evident today.
• In 1972, two other Wanapum-line dogs, Wanapum Lucky Yo Yo and Cody of Wanapum, at three years of age, were the youngest retrievers to qualify for that year’s national championship. (Wanapum Kennels was the name of Bauer’s kennel/line)
• In 1973, Wanapum Lucky Yo Yo sold for $22,000, which was at the time the highest price ever paid for a dog – a distinction that earned a place in the Guinness Book of Records.
• Cannonball Kate, a descendant of Wanapum Sheba, who was a direct descendant of Dart, long held the record for the highest one-season total of accumulated points, Open and Amateur, for any Labrador female in the United States.
• Always the businessman, Berg, the company’s historian, said that Bauer was fond of importing British-bred Labs from the UK that were already pregnant. “That way he only had to pay the import fees on one dog, but really got several.”