Why it is Ethical to Hunt Big Game with Dogs

As a dog man, I believe hunting with canines enriches the experience of pursuing game beyond merely being outside and... 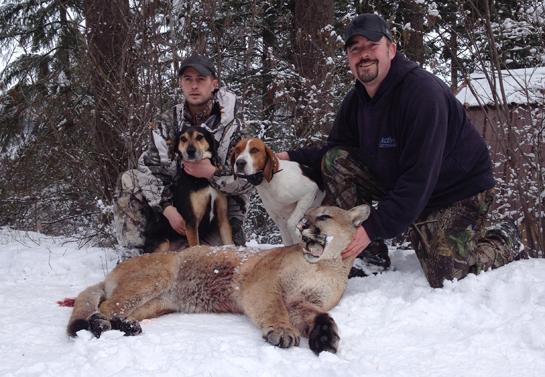 As a dog man, I believe hunting with canines enriches the experience of pursuing game beyond merely being outside and pursuing your quarry. Working with an animal to take another defines teamwork, evolution, and the relationship between man and dog.

Beyond just enabling us to take animals – be it pheasants, quail, chukar, ducks, geese, coyotes, cougars, bears, raccoons, or whatever else – hunting with a dog allows us to take some game in a more ethical manner.

Here in Washington state two counties, King and Pierce (home of Seattle and Tacoma, and a bunny-hugging hippies and city folk) make all the laws for the rest of the state. In their ecologically ignorant and short-sighted wisdom, the West-side hippies made hunting cougars and bears with dogs illegal more than a decade ago (thanks to lots and lots of out-of-state money from the Humane Society of the United States).

But, about five miles from my place, in northern Idaho, the use of dogs for cats and bear hunting is legal.

The anti-hunters like to say using dogs to tree bears and cats is an unfair advantage for hunters. Following that line of thinking, like all lines of ban-inducing thought go, depends upon how each one of us defines “fair.” The fact is, however, that using dogs to hunt big cats and bears gives the hunter a better chance to identify, age, and determine the sex of his prey. It helps ensure the harvest of a mature animal that has provided the biological duty of reproducing.

My friend, Mike Woodard, pictured here with a big mature tom cougar, makes that point perfectly clear. “We got a good lion with a bow using dogs. It was a good chase and fun hunt,” he said. “We put five in the tree so far this year, but this was the first one worth shooting.”

Using dogs, Woody and his hunting party were able to tree five cats and evaluate them. This one cat was taken out of the population, having undoubtedly already reproduced, while several others were allowed to return to the environment and carry out their existence. That selective, ethical, hunting isn’t possible here in Washington.