The basis for all training starts with introducing your dog to critical aspects of the hunt at critical times in... 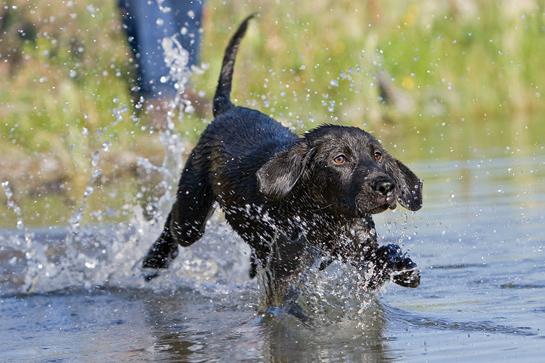 The basis for all training starts with introducing your dog to critical aspects of the hunt at critical times in his development. Regardless of whether you’re raising a pointer for quail, a retriever for mallards, or a hound for raccoons, new experiences should always take place in a controlled environment and be a positive experience.

Water: Dogs usually take to water easily, but if you mess this up, it’ll set your training back weeks. To help the initial foray go smoothly, do it on a warm day in a pond with tepid water and a gently sloping bank–those three factors will eliminate most issues. If a pup is still hesitant, don’t force the issue. Instead, wade out into the water with the dog and splash around, or bring a more experienced dog along to lead the way.
**
Game:** Whether it’s a bird, a coon, or a cougar, the key to introducing dogs to game is to start small and make it fun. Don’t throw a small puppy in a scenario with a hook-spurred rooster; instead, try a wing-clipped pigeon or quail. Let hound pups chase a captive coon in a roll cage–or even the family cat up a tree (just not too often)–to awaken his desire. The goal is for the puppy to gain confidence and proficiency in handling smaller game, which will help him tackle larger prey without hesitation.
**
Gunfire:** Early experiences with firearms can have a lifelong effect on a dog. A gun-shy dog is a manmade problem–poor judgment in this area has ruined more good dogs than anything else–and it’s almost always avoidable.

Don’t surprise your dog by firing a shot while he’s eating. Instead, build your dog’s confidence with prey drive. Get him focused and amped to chase after your intended species by teasing him with a wing. When he absolutely wants that bird or coon, you can fire a shot while he chases, but do it with a small caliber or gauge and from a distance.

If the dog is startled, wait a few days and try again from farther away. If he doesn’t pay any mind, move closer. After a couple of days he should equate gunfire with prey and get excited when the guns come out.

Puppies catch on quickly, but the greatest folly amateur trainers make is progressing too fast. Take your time and have fun.