In a perfect world, by the time you’ve trained your dog proficiently enough on the skills required for success, you... 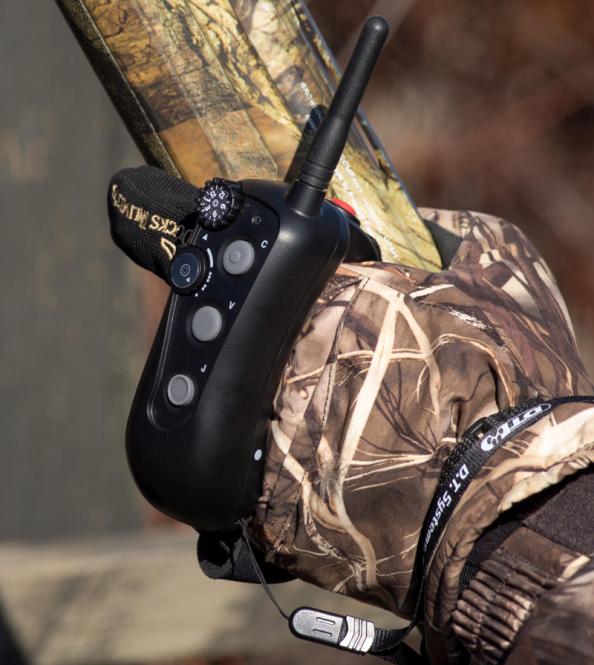 In a perfect world, by the time you’ve trained your dog proficiently enough on the skills required for success, you shouldn’t need to use the e-collar very often when actually hunting. For most of us, that level of success is often hard to come by without keeping our pup out of the action for a season or two and completely focusing on training.

One of the biggest issues I know of when working dogs, whether actually hunting or during training, is keeping an e-collar transmitter close enough to use with proper timing but out of the way enough to accomplish other tasks – such as handling a shotgun, shooting birds, carrying and throwing dummies, operating a winger, or handling a leash. E-collar companies make holsters or equip their transmitters with lanyards or clips, while apparel companies make some upland vests and waterfowl pieces with specially designed pockets for storage – at best, these serve a modicum of usefulness.

The problem I’ve always had is: they’re still either in the way or too far removed to actually do any good. In a perfect world, it’s not an issue and the dog behaves. In reality, dogs break, get loose, and start chasing birds. They blow off a whistle and do many other things (you can argue, and perhaps rightly so, that if you’re having these issues, more training is required) that require a trainer to use a correction. For someone using an e-collar, that means pushing the button on the transmitter – which is often buried in a pocket with shells or stuffed under a coat in some fashion.

By the time a hunter can actually dig out the transmitter, the moment is gone – the dog isn’t going to understand what he’s receiving a correction (was it indeed for breaking? Or was it because he jumped over a decoy? Or was it because he picked the crippled bird up? Or because he got in the water?). Faced with making an ill-timed correction or teaching the dog that two sets of rules apply, one for training and one for the hunting field, a hunter is puts himself in a tough situation.

In response to this dilemma, D.T. Systems has come up with a new e-collar system that’s pretty cool and allows you to keep the transmitter handy (so to speak), but without occupying an actual hand.

The company’s new Rapid Access Pro Trainer (R.A.P.T) 1400 e-collar has a slight curve to its design and comes with a strap that secures it to the back of your hand. A button on top, which can be pressed with your thumb, allows for single-handed operation – even if you’re holding something (like a shotgun) in your hand. No more digging through a shell-filled pocket or reaching into the back pocket for a transmitter; very ingenious if you ask me; something that’s sure to help in transition training when the trainer is carrying a gun and when hunting with a young dog. Gor more imagery and to see it in action, check out this video on YouTube.

The R.A.P.T. comes in black or camo, is expandable to three dogs, has a 1,400-yard range, 16 levels of stimulation (continuous, nick and jump) and a vibration feature. The collar is waterproof and smaller than many previous D.T. models – it weighs 4 ounces. The innovative transmitter is waterproof and it floats. The black model has an MSRP of $200 while the camo model is $210.