The summer months not only mark the dog days of heat, they also hasten the proliferation of fleas and ticks.... 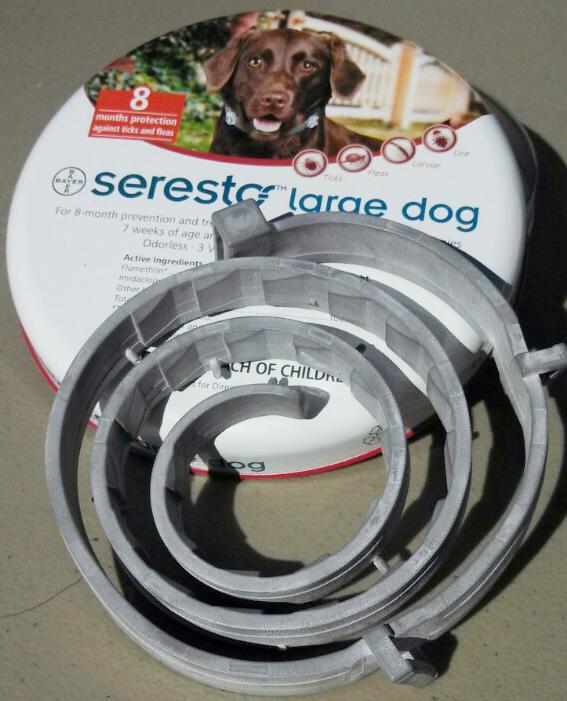 The summer months not only mark the dog days of heat, they also hasten the proliferation of fleas and ticks. From early spring through the early hunting season, these parasites pose a threat to you and your dog – no matter where in the country you live. While vigilance can protect you, only a consistent parasite prevention program can protect your dog.

Most vets recommend a year-round prevention program, and for good reason. While I always tend to think about the benefits to their pocketbook as a main reason, that’s not fair. Until your environment is consistently cold, fleas and ticks can always find your dog. Even once it’s cold, a warm late-fall or early spring day can cause the parasites to become active.

I’ve used several topical applications to help protect my dogs, and have for the last several years settled on Frontline Plus, I’m trying a new collar from Bayer called Seresto.

Bayer sent me a collar to try out, along with plenty of information. I’m testing it on Hoss, my English bulldog, for two reasons. One, I want to see how it protects him at the lake when he spends summer days in an area frequented by deer (therefore deer ticks). Second, I’m testing a hypothesis relating to his head tremors and topical flea and tick applications. I don’t know if there’s any correlation, but it’s something I want to explore.

The Seresto collar seems to be a great alternative to monthly topical applications. Foremost, for bird-dog owners, the collar will protect your dog up to eight months! For retriever owners, you’re looking more at five months (if a dog is bathed or swims more than once a month, effectiveness is cut to about that timeframe).

When you consider cost-per-month, the Seresto collar costs about the same as monthly topical treatments under peak performance (even cheaper if you can find a deal some place like at Amazon. The upside is that you don’t have to mess with oily containers and dogs, and you don’t have to remember to apply the stuff (this is a major faux pas I consistently make).

A European study showed better than 96-percent mean effectiveness (and up to 100 percent at times); Bayer has other studies that show a 99.18 percent short-term effectiveness and greater than 98-percent effectiveness after 236 days. The collar protects against the organisms that cause Lyme disease, Rocky Mountain spotted fever, anaplasmosis and Canine Ehrlichiosis by using Bayer’s sustained-release technology that releases a continuous low concentration of imidacloprid and flumethrin for 8 months. It can even help fight chewing lice and aid in mange treatment.

The collar comes in two dog sizes – large and small, which is defined at the weight limit of 18 pounds. It can be used on puppies as young as seven weeks and comes with snap-on reflectors. For those of you worried about a working dog wearing a collar while training or hunting, and then becoming snagged on something, the collar comes with break/release safeguards.