With a trophy-quality king eider, harlequin, and Barrow’s goldeneye all taken last year during two trips to Alaska, my mind... 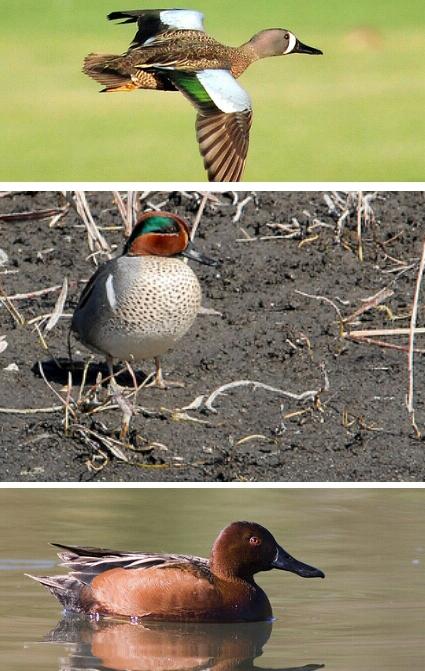 With a trophy-quality king eider, harlequin, and Barrow’s goldeneye all taken last year during two trips to Alaska, my mind has been preoccupied with the “next great hunt.”

I’m thinking a teal “slam” would be pretty cool. The green-wing, blue-wing, and cinnamon teal are residents of North America, and they all have their own distinct and beautiful markings and plumage. Putting aside the fact that they’re fast, darting flyers, the small ducks present other challenges.

Green-wing teal: The hardiest, and smallest, of the group, green-wings will stick it out longer than the other two ducks when the weather gets nasty. This fact alone makes them easier to add to a bag, even though their numbers are half those of the blue-wing teal. Their chestnut head with iridescent green patch stands out on the water or when showcased as a mount.

Blue-wing teal: With approximately 7.7 million blue wings in the country, one of the most numerous duck species, you’d think it would be easy to get a plumed-out blue-wing teal. Well, you’d be wrong. Compared to the green-wings, blues are a sickly little sister – with the first hints of cold weather, they bounce and head to Mexico and South America.

I’m sure to bag many of them during the September teal season when I head to Louisiana with Mossy Oak to try out their new “Blades” pattern and hunt Honey Brake, a 40,000-acre duck-hunting mecca in a state where duck hunting is a religion. But, the birds likely won’t be sporting their full plumage then. The slate gray head and neck with striking black-edged white crescent in front of the eyes doesn’t usually come in until later in the year. By that time they’re sunning themselves in the tropics. I might have to look into a more southern duck hunt one of these days.

Cinnamon teal: The least common of the North American teal, cinnamon teal are estimated to have a population of 300,000 birds at most. They’re confined predominantly to the West coast and intermountain west, mainly The Great Salt Lake area, and, like blue-wings, move out at the first hints of cold weather. To get this beautiful, red-eyed and dark reddish-brown specimen in breeding plumage for the wall, you pretty much have to visit Mexico or South America – which if I decide to go that far for a cinnamon, I might as well add the South American silver teal to the list and make it a “World Teal Slam,” or perhaps more accurately an “Americas Slam” since a world slam wouldn’t be possible without the Far East/Russian Baikal teal.

Huh, this dreaming is getting expensive…