For waterfowlers, the early teal season is a preamble for the regular season – a reward for enduring the heat... 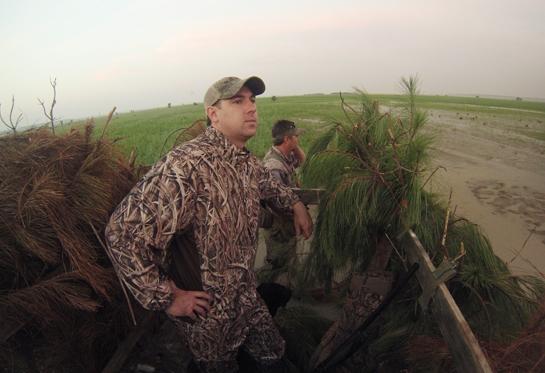 For waterfowlers, the early teal season is a preamble for the regular season – a reward for enduring the heat and dearth of action since last season. But for many hunters across the South, the wait continues.

Summer weather continues into late September across the country, and with mild temperatures, blue-winged teal, one of the first ducks to migrate, have held strong in Canada.

I just spent three days hunting Honey Brake Lodge in Louisiana with Mossy Oak’s director of public relations, Tim Anderson, and the director of marketing for Drake waterfowl systems. The anticipation of trying out the apparel company’s new Shadow Grass Blades pattern at one of the county’s premiere duck-hunting hot spots has been building for weeks.

Honey Brake is a huge piece of property (approximately 35,000 contiguous acres) in the number-one duck-hunting state in the country (Louisiana routinely harvests the most birds in the country; in 2011 that was more than 2.8 million birds). The Honey Brake property has been tailored for two things: sustainable, responsible farming practices and duck hunting. Crops such as soybeans, millet and rice are farmed, and fields of WRP are planted, and in the fall, approximately 10,000 acres are flooded for duck habitat. It’s mindboggling to say the least (and that’s before you even enjoy the five-star accommodations and first-class service).

But no matter how plush the accommodations for humans or migrating waterfowl are, if the weather doesn’t push the ducks down, it doesn’t matter. And that’s what’s happening right now.

All across the South, from Honey Brake in Louisiana to Texas to Mississippi to Missouri, the absence of blue-winged teal is leaving duck hunters anxious. Everyone you talk to says the same thing: the ducks are a week to two weeks behind typical schedule.

Last year, hunters at Honey Brake killed 37 limits in 45 minutes – and that was taking it slow and rotating shooters so that the entire hunt would last more than 4 minutes. Warm weather in the north has kept the birds up north (it’s warm in Louisiana, too – humid and in the 90s).

However, fronts are beginning to roll in and everyone is anticipating that the petite ducks will arrive at some point this weekend. And it very well could happen – blue wings can make the trek from the Canadian pothole-prairie region to the Gulf of Mexico in just over 24 hours. With a storm line crossing the Midwest, those birds could start zipping around the South by the end of this weekend (which might be too late for my friends in Alabama, as the season closes Sunday).

While we didn’t experience barrel-burning teal action, we did scratch a few birds out each day, had some good dove hunting in the evenings and, of course, enjoyed the finest of Southern hospitality and food, which is almost worth the trip itself.