Today’s drugs are, literally, life savers. But nature’s resiliency is amazing, and given time, species will adapt technologically, environmentally or... 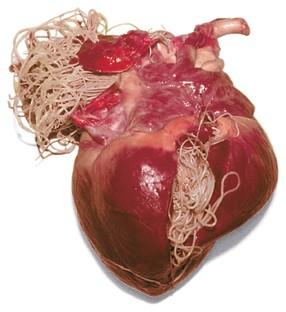 Today’s drugs are, literally, life savers. But nature’s resiliency is amazing, and given time, species will adapt technologically, environmentally or genetically to survive. It’s a double-edged sword – we save lives (both animal and human) but also make what we’re suppressing stronger. We see it with MRSA infections in humans, and now we’re seeing it with heartworms in canines.

It seems a small percentage of heartworms have adapted – by genetically mutating and evolving – and are able to withstand traditional heartworm preventatives that use ingredients such as Ivermectin, Spinosad and Lufenuron.

The mutation in question isn’t really new, but it has finally been agreed upon by scientists. Prior to last month, scientists from the American Heartworm Association disagreed on the validity and existence of preventive-resistant heartworms. Other people, those who live in the real world as opposed to a laboratory, have been convinced for many years that heartworms were evolving and growing resistant to preventive drugs.

I had this exact conversation with J. Paul Jackson at Honey Brake in September after we talked about the differences between trial dogs and hunting dogs. Jackson, who was a registered nurse, has been convinced of their existence and has actually worked through the whys and hows of it all and has even come up with a long-term treatment.

Right now, it seems the mutant heartworms are contained to a small area of the Mississippi Delta, but if you look at any heartworm map you’ll see that the entire Mississippi River basin is a heartworm hotspot. That’s because mosquitoes spread the disease, and warm, humid temperatures and a large water source are prime survival factors for the little blood suckers. It’s likely only a matter of time before the resistant strain of heartworms spreads – if it hasn’t already.

This is somewhat scary – heartworms can kill dogs, and it’s not a good way to go. In addition to causing death, what blows my mind is this: scientists don’t really know why or how preventives affect heartworms. Before they can figure out how to address the mutant strain, they’re going to have to unlock how the drugs they’ve been giving dogs to stop them in the first place actually work (a novel concept, for sure).