Hunting Dogs: 3 Genetic Factors to Consider When Picking a Puppy

In the last couple of months I’ve had a couple of people ask if I knew of any good Labrador... 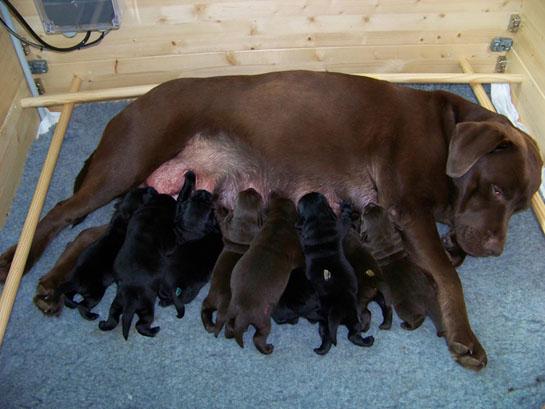 In the last couple of months I’ve had a couple of people ask if I knew of any good Labrador retriever litters being born in the Pacific Northwest. Determining if a litter is “good” or not, regardless of breed, depends upon the individual and how that dog will be used.

Identifying what you want/need is the most important thing; you can’t even get started until you have an idea of the role that dog will fill in your life — what might be the ideal dog for a hunting guide might not be the perfect fit for someone looking for a therapy dog. You also have to prioritize the traits that are important to you; does the size of the dog take precedence over performance, or are the working attributes more important? Are you willing to sacrifice everything for a specific coat color/type, or are you willing to take any color and size of dog so long as it doesn’t shed excessively?

These aren’t always easy questions to answer. Everyone wants the “perfect dog,” but rarely will all of a dog’s attributes align with everything we want. And honestly, a dog’s behavior later in life has more to do with the consistent training you provide (or don’t); no puppy, regardless of breed or pedigree will be calm and obedient without consistent training.

Once you identify the primary role(s) the dog will have in your life, and can prioritize the attributes, there are three prongs to determining if a litter is “good” (for you anyway). And each boils down to genetics.

1. Physical and Mental Attributes
Size/weight, coat color/style, length of leg, head shape, and the like are all physical attributes that matter to people, as is a dog’s temperament and disposition. How much they matter goes back to what’s important to the individual and the role of the dog (i.e., a heavy-boned, short-legged dog might work fine for retrieving in the water, but might struggle to perform on all-day hunts in the upland fields).

To get a good idea of what a potential litter of puppies will look like when they mature, simply look to the sire and dam being bred. Like humans, dogs receive half their DNA from each parent. How each of those genes combines to express the physical type is a random drawing, and involves dominant and recessive combinations, as well as a whole slew of other regulating factors within genes. This random pairing of genes is why you want to select a puppy from parents that are similar in size and conformation because you can have a pretty good idea of how they’ll look.

This is also why you don’t want to pick a puppy from two dogs that are on extreme ends of the size spectrum or whose attributes (both physical and mental) are too varied — a large sire paired with a small dam won’t produce medium puppies. The randomness of the genetic lottery will produce some small puppies, some medium puppies, and some large puppies; good luck guessing which will be which by eight weeks of age. The same goes for other physical attributes such as head shape; the puppies have an equal chance to receive each parent’s physical attribute.

The same idea goes for each parent’s temperament and personality. Look for dogs that possess similar energy levels, willingness to please, style, etc. Picking a dog from an amped-up sire and lackadaisical dam only adds to the randomness of genetic assignment — will it get mom’s lack of drive and dad’s large size, or dad’s high prey drive and mom’s diminutive structure? Will it be aloof like mom or willing to work and learn like dad? You won’t know until the dog matures, which is likely too late to do you much good if you have a specific task in mind for it.

Bottom Line: Look for a sire and dam that are similar in size, have the majority of physical attributes that are important to you, and possess the temperament you desire in a pup.

2. Pedigree and Performance
If you’re just looking for a pet, a purebred’s pedigree probably won’t matter to you a whole lot. However, if energy level is an important attribute for you, it can serve as a clue (i.e., field dogs will likely have a higher energy/drive compared to conformation dogs).

The pedigree serves as a biological record of a litter’s ancestral purity and accomplishments. No matter the role you want that dog to fill, you can look to its pedigree to see if its ancestors had the genetic fortitude to carry out the task. If you’re looking for a conformation dog for the show ring, look for those titles. If you’re looking for a field dog, look for those titles — be it in retrieving, upland, tracking, digging, etc.

Ancestors in a pedigree that lacks titles didn’t necessarily lack the instinctive traits required to carry out a task — they might just not have been campaigned for a multitude of reasons. But too many untitled dogs should send up a red flag. Unless the dog(s) in question has/had a reputation for producing puppies that successfully competed, how are you to know whether or not it/they have the genetic makeup to produce offspring that can perform?

This is all about stacking the odds of performing (prey drive, tractability, scenting ability, etc.) in your favor. Too many question marks could, but not necessarily, mean that all those other good genes from titled dogs have been watered down. With that said, remember to keep the mother’s pedigree and accomplishments in mind — people tend to focus too much on the sire — because she’s contributing half the genetics to your future pup.

Bottom Line: Look for a puppy that comes from a titled pedigree in the venue you want the dog to compete. That will be field trials and hunt tests in the hunting world.

3. Health and Wellness
Through my work with Paw Print Genetics, I’ve spent a lot of time thinking (and writing) about the genetic health of dogs and why it matters. Nobody wants to buy a sick puppy, but too many people will roll the dice and choose to believe that since the sire and dam are healthy, the puppies will be too.

You are about to fork over a lot of money to the breeder, and then invest much more into the dog over the course of its lifetime, especially if you campaign or hunt the dog, and you’re going to spend countless hours training that dog (time is money), not to mention the emotional bond you (and your family) will form with the animal.

Some mutations simply impact the ongoing quality of life of the dog (no small matter for the dog, you or your wallet). Others such as EIC, CNM, DM and PRA are debilitating, and can end a dog’s hunting career and/or its life. To compound the matter, someone producing puppies without testing simply because the same sire and dam have produced seemingly healthy puppies in the past is acting in ignorance – some diseases, such as degenerative myelopathy, are late-onset and don’t present until the dog reaches maturity.

In addition to genetic mutations, good breeders will also screen their breeding stock for physical issues common to their breed – for instance, hip or elbow dysplasia.

Bottom Line: Pick a puppy from a litter that has had both the sire and dam screened for genetic and physical issues common to your breed of choice.

So what makes a good litter? The answer is simple: Good parents — it’s all in the genetics.

The tricky part is identifying and prioritizing what you really want/need. After that, it’s simply a matter of looking for a breeding where both parents embody those physical and mental qualities, as well as health clearances.