Colored shot pellets might sound a little gimmicky — and it could be — but for anyone who shares a... 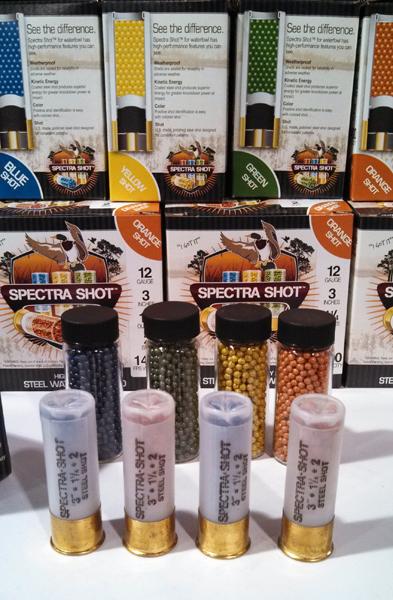 Colored shot pellets might sound a little gimmicky — and it could be — but for anyone who shares a waterfowl blind with someone who is always claiming they hit every incoming bird, Spectrashot can help settle the debate as to who actually dropped it.

Spectrashot is a shotgun shell that uses pellets covered in a patented coating. The idea is that competitive hunters can tell exactly who hit the birds when they’re cleaned. The company also has a skeet load that supposedly makes the shot string visible to the naked eye – theoretically making it easier for a shooter to correct misses.

According to the company, the coating also adds weight (and therefore kinetic energy and knockdown power) to each pellet, as well as covering any imperfections in the pellet (producing a more uniform and consistent pattern).

Waterfowlers can choose between yellow, orange, blue and green 12-gauge pellets. Three-inch shells with 1-1/4 ounce loads produce a 1,400 fps velocity. They’re available in 2 and 4 shot, with the company working on a BB load.