You’re not the only one suffering from cabin fever. Bird dogs can also get the winter blues, and your four-legged... 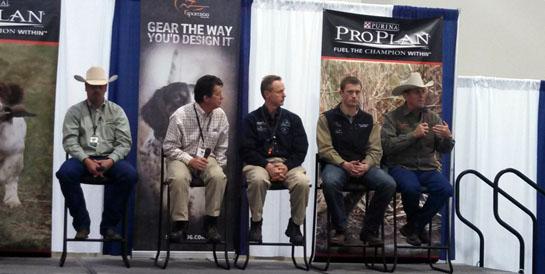 You’re not the only one suffering from cabin fever. Bird dogs can also get the winter blues, and your four-legged hunting buddy is likely distressed due to enclosed spaces and lack of stimulation.

Several top professional trainers weighed in on this topic during last week’s Pheasant Fest in Milwaukee, Wis. One of the most popular draws at Pheasant Fest was the Purina sponsored Bird Dog Bonanza Stage. It featured some of their top professional trainers – including retriever trainer Tom Dokken, bird dog-training royalty Rick and Ronnie Smith, and walking canine brain trust Bob West, Director of Sporting Field Operations for the Purina Professional Engagement Team. Each trainer, which also included SportDog’s Josh Miller, took turns giving seminars on everything from the basics of building a bird dog and advanced training to e-collar use/introduction and even shed hunting.

At the end of each day, Dokken, the Smiths, Miller and West would ascend the Purina Bird Dog Bonanza Stage and host a Q&A with the audience. Every manner of question was asked, and usually multiple pros weighed in with their opinion.

One relevant question asked was: “how do you deal with training in the dead of winter?”

Rick Smith, who was just inducted into the Brittany Field Trial Hall of Fame, gave a great answer – one that many of us who are still tightly gripped in the cold, unrelenting fist of winter can use.

In his Virginian drawl he offered a commonsense answer that basically amounted to: “You do with whatcha got.”

In other words, he continued, while it would be nice to pick up and move south and continue to train uninterrupted for the winter, for most people with a job and family, that’s just not realistic. So, you have to work with what you have and make do with the circumstances you’re living in.

His suggestions included:
– If you can get outside and train, then do it.
– If you can’t work dogs how you’d like, then at least try to get them out and get them some exercise.
– If there’s too much snow or it’s too cold to train or spend a sufficient amount of time outside, then bring your dog inside and do what you can – reviewing obedience and other basic tasks is big for the dog and pays dividends in more advanced training.

Basically, do something, anything, to keep the dog’s mind working, sharp and engaged. Not only will that help the dog combat the winter blues, but it will also alleviate your boredom, too.

Last week’s Pheasant Fest showcased more than 30 breeds of hunting dogs, 500 exhibitors that had something to do with pheasant and quail hunting (from seed planting to saucepan preparation), and saw more than $1 million raised for the organization’s youth programs.