For the last three years or so, pro trainer Tom Dokken has been championing the use of dogs for shed-antler... 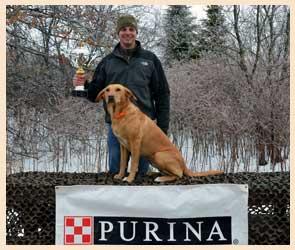 For the last three years or so, pro trainer Tom Dokken has been championing the use of dogs for shed-antler hunting. There are several trainers out there teaching dogs to search out and retrieve shed antlers, but Dokken has created an association that holds qualifying events and ultimately an invitational championship. This year’s North American Shed Hunting Dog Association 2014 World Shed Dog Championship will be held April 12 and 13 in Northfield, Minn.

The NASHDA has grown to include three qualifying events, a couple of seminars a year, and even a wild shed-hunting derby. It’s also expanding geographically, with qualifying events now held in Indiana and South Dakota. Dokken is eyeing expansion into the West, where shed hunting is a big deal for sportsmen, and where whitetail, mule deer, elk and even moose all roam.

Shed hunting gives sportsmen something to do with the dog and family during the offseason; simultaneously, it can give deer hunters a leg up in offseason scouting. For proof of this, look no further than the deer-industry darlings Lee and Tiffany Lakosky, who have a dog or two in training with Dokken.

In fact, Lee and Tiffany were with Dokken at last week’s Pheasant Fest in Milwaukee, Wis., giving a seminar on shed-dog training. Oh, yeah, I was there, too, with Paw Print Genetics (booth 556) discussing canine genetic health.

Tank, the Lakosky’s dog, was at Dokken’s place in South Dakota a couple of years ago when I stopped by for a few days of pheasant hunting. Dokken was working him on the advanced pattern field, and discussed the intricacies of training a dual- or triple-use dog (upland, waterfowl and shed dog); the multipurpose dog is proving to be the norm in shed hunting.

“What we’re finding is that 80-90 percent of the dogs are trained bird dogs,” said Dokken last week. “People don’t have to have a dedicated shed dog, but can have an upland dog and then dual-train him; they can use their existing dog and go right into something new and fun when the season is bird-hunting season is over.”

The NASHDA circuit is set up very similarly to a retriever hunt test, with dogs able to participate at junior and senior levels — the degree of difficulty going up as the dog advances. There are Junior, Amateur and Open divisions to compete in.

This year’s championship has a couple of interesting storylines:

Josh Miller, a young pro trainer and employee at SportDog (who will also be at Pheasant Fest), has won the Open Division the last two years (narrowly beating out Lee Lakosky and Tank) and will be handling at least one dog this year — he will also have several clients running their own dogs. If he can win the Open again this year, it will be a three-peat. I’m betting Lakosky would like to avenge his narrow loss.

In addition to Miller defending his Open title, the world champions from the Amateur and Junior divisions will also be in attendance and will seek to repeat as well.

While still small, the shed-hunting competition is beginning to catch on little by little, and with more trainers getting into the game, their clients will undoubtedly want to test their dogs under timed conditions. And with a few trainers, such as Miller, already leaving their mark and gaining a following of clients, it’s just a matter of time before human nature kicks in and someone else wants to knock them from the top — all in good fun, of course.