Last year, Shadow Oak Bo, an orange and white setter from Georgia, took the bird-dog world by surprise by becoming... 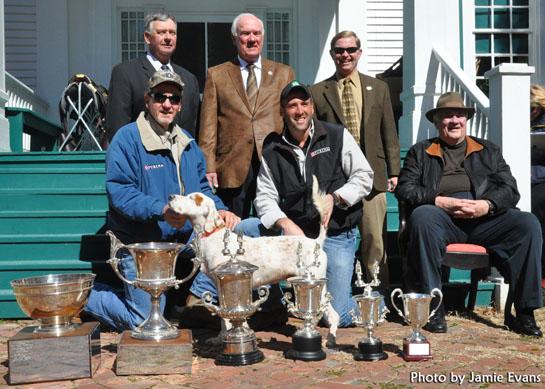 Last year, Shadow Oak Bo, an orange and white setter from Georgia, took the bird-dog world by surprise by becoming the first setter since 1970 to win the bird-dog National Championship at Ames Plantation. Well, that feat apparently wasn’t enough for Bo, his handler Robin Gates, and owners Butch Houston and Dr. John Dorminy. This past week, Bo made history again by becoming the first setter in 112 years to win back-to-back championships!

His winning performance included seven points and four backs spanning three hours. He maintained his focus throughout, making a point at the three-minute mark and then with time winding down after the three-hour hunt. According to the recap of the performance, Bo was seemingly perfect – working diligently the entire time, using the wind to his advantage, thoroughly hunting suspect cover and, when needed, taking to foot and getting out in front as far as 1,000 yards.

The last setter to win back-to-back championships was a female named Sioux in 1902, and she had a little bit more of an advantage. When she repeated, it was against a field of only 10 other dogs – all of which were setters. Bo squared off against a field overwhelmingly made up of pointers.