Is Your Dog Breeder an Ostrich?

People don’t change. We get set in our ways and beliefs, and if something runs counter to those systems, we... 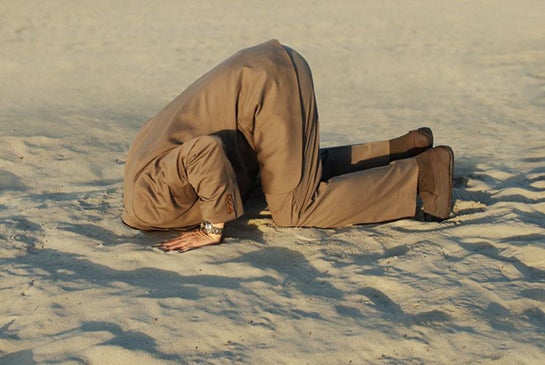 People don’t change. We get set in our ways and beliefs, and if something runs counter to those systems, we resist, argue and dig in to defend our position. This happens even in the face of overwhelming scientific data. And dog people could be the worst offenders on the planet.

All dog people learn from one another (sometimes what not to do), and begin to develop their own theories. These theories are usually related to what they’ve learned (been told) by someone else, and from their own experiences and their interpretation of those experiences.

That’s great. I love hearing how one trainer accomplishes a goal and then how another trainer does it completely different. That’s one of the great things about training dogs – there’s more than one way to get the job done, and more than one breed, and their unique dispositions, with which to accomplish the goal.

But as I work with Paw Print Genetics and learn more and more about the complexity of the canine genome, screening procedures, inheritance and more, I come across more and more breeders and trainers from across the country, and from all venues of canine competition, that resist, argue and dig in their heels as to why they don’t need to genetically screen their breeding stock and/or pups.

In effect, they’re like a scared ostrich burying its head in the sand to avoid any chance of danger. The problem is: scientific data isn’t theory, and ignorance isn’t bliss. Sooner or later the science will catch them, as assuredly as a lion will an ostrich that thinks it’s safe by hiding only its head.

Usually, a puppy-producing breeder or trainer that’s reluctant to screen his or her dogs takes one of two stances:

This is old-school theory and logic at work (throw a little hubris in for good measure). Prior to genetic screening, the only way to figure out which dogs were good to breed together was by trial and error. If pups were affected with a disease, you didn’t repeat the breeding and took care when breeding its offspring regardless of mates. Sometimes it worked, sometimes it didn’t. Sometimes pups had to be culled. That was the cost of breeding dogs.

The problem is: Unless you’ve used a completely closed line of dogs and never introduced an outlying dog, there’s no way to know for certain your lines are clean. With recessive, x-linked and mitochondrial inheritance, as well as variable expressivity, incomplete penetrance and other issues, it is impossible to know for certain which dogs harbor mutations in their genetic code – that’s something only science can definitively ascertain.

2) The second stance is never really expressed outright, but is rather alluded to – and it boils down to: “I’ve produced a lot of puppies over the years, what if my best dog(s) have a genetic mutation?”

This is fear rearing its head. Fear of the unknown. Fear of the worst-case scenario. It’s completely understandable – no conscientious breeder wants to produce affected pups that will lead a less than ideal life or to saddle puppy buyers with a sick dog.

However, the days when you had to use old-school logic for breeding are rapidly coming to an end – sequencing of the canine genome in 2005 hastened its demise, and while we’re far from solving all the riddles, we have identified many mutations that cause very serious diseases. Continuing to deny scientific advancements because it scares a breeder isn’t acceptable to the dogs being produced or the people buying them.

What a breeder had to do 10 years ago to produce dogs is perfectly acceptable. If there are carriers, or even affected dogs, it’s an acceptable situation – we do the best we can with the best knowledge we have at the time.

But times have changed. The science has gotten better. Continuing down the same path because of the fear of possibly identifying a weakness in your line, or for producing carriers or affected pups in the past, is the wrong way for a breeder to look at the situation. Instead, they should embrace the science, use it to better their lines and shout it from the rooftops – for carriers and affected dogs can still be bred, it’s just a matter of using science to choose a mate that will produce the healthiest puppies. Denying science out of fear of past mistakes is no more useful than the ostrich with its head in the sand.

If you’re buying a puppy, look for a breeder that has conducted the genetic screening for your breed and can produce a Canine Genetic Health Certificate and other documentation that proves the sound genetic health of the parents and litter.