There was little doubt that Thompson Center was going to expand on its line of Icon rifles that it launched... 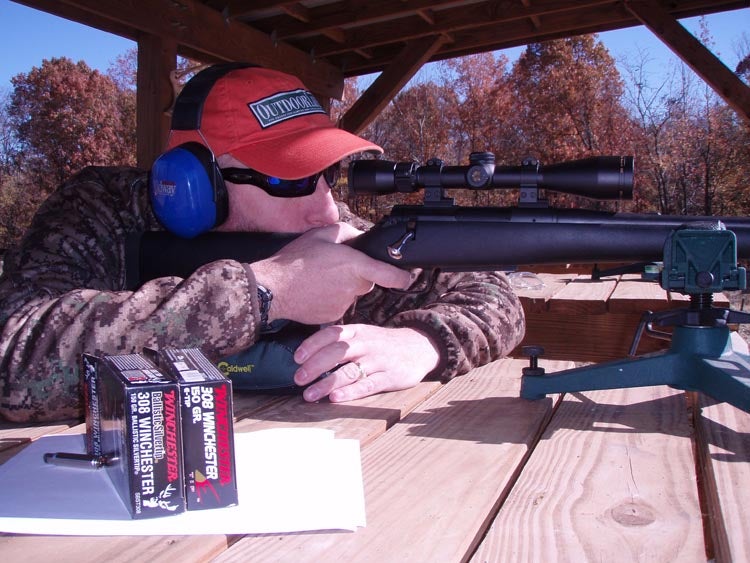 There was little doubt that Thompson Center was going to expand on its line of Icon rifles that it launched two years ago.. A favorite pastime for gun nuts is to try to guess what’s coming next.

Well, the answer is here and it is called the Renegade 2. The T-C Renegade 2 can be thought of as the Icon’s little brother–it’s not as fancy and it isn’t as sophisticated but the family resemblance is unmistakable nonetheless.

And for those hunters for whom the Icon’s $1,000 price tag was difficult to justify the best news is that the Renegade 2 will cost about half as much. According to Gregg Ritz, the MSRP on the new rifle will be $500 and the street price should come in around $450.

I was lucky enough to be one of the first to shoot the new rifle this morning down at the legendary Gametrails hunting lodge in Western Kentucky and the initial impression it left is very good.

First, here’s what the Renegade 2 has in common with the Icon:

One of the best bits of news is that the Renegade 2 will use the same barrels as are found on the Icons. These high-quality barrels have recessed and chamfered crowns and a type of rifling the company calls “5R,” where the lands and grooves don’t meet at a sharp 90-degree angle, instead having a rounded corners. This is supposed to cut down on accuracy-degrading fouling.

The adjustable trigger is also the same on the two rifles. The shooter can select a trigger pull weight somewhere between 2.5 to 6 pounds. As on the Icons I’ve shot, the trigger pull on the Renegade 2 is crisp with little sign of creep. It’s a fine trigger.

The detachable magazine will also seem familiar to shooters who have spent time with the Icon. The bottom of the magazine extends a bit beneath the stock and because of its single-stack design gives the shooter a capacity of 3+1.

The shape and lines on the receiver are very much like the Icon as well. The top of the receiver has built-in Picatinny style bases and an oval cut for feeding cartridges and ejecting empties.

The bolt has the same three-lug design as the Icon and the corresponding shorter bolt lift as compared to a two-lug turn-bolt action. Speaking of the bolt, the bolt shroud has the same rakish angle to it, along with the same style cocking indicator, though the shroud lacks the cutouts that are one of the more distinctive design elements on the Icon.

With so much in common there has to be some things that are different, right? How’d they save all that money so they could charge half as much?

The biggest changes from the Icon are out of sight. For starters the Renegade 2 does not have the flat-bottomed receiver that the Icon does. For those not familiar with the Icon, one of its accuracy-enhancing features is its bedding system, which mates a flat-topped aluminum bedding block to the flat-bottomed receiver. The theory behind the flat-on-flat design is that there is no chance for the action to roll or torque in the stock. In addition, the flat bedding block adds rigidity to the whole business, which is always a good goal as far as accuracy is concerned. Instead, the Renegade 2 has a round bottom design (round is always cheaper and easier to make) that mates to a stock that doesn’t have any special bedding features.

Then there’s the matter of the stock itself. One of the big selling features for the Icon is the quality of the wood they are stocked with, which on the numerous samples I’ve seen certainly qualifies as a better grade of wood than is typical on rifles at comparable prices. The stock on the Renegade 2 is a much more straightforward affair and weighs about a half-pound less than the wood stock on the Icon, which is actually a point in favor of the newcomer as the heft of the Icon was criticized by some as being a bit too heavy.

The bolt handles on the Renegade 2 are also not designed to be interchangeable as they are on the Icon. By not offering this feature, T-C doesn’t need to machine the bolts and bolt handles to the same tolerances as with the Icon. Again, this means money saved, both in terms of product costs and the labor involved in checking the fit of the pieces.

Enough about the specs: How does it perform? Well, on the two samples we were shooting this morning, the groups were coming in somewhere around 1.5 inches or so with plenty of shots that were touching on the paper, which is always a good sign. What conclusions can we draw from this? Not much. We’re shooting two prototype rifles with one brand of ammo (Winchester) and they were certainly within what I consider acceptable accuracy for a hunting rifle. Given that the wind is howling today (erratic gusts above 20 mph) and that the rifles are topped with Nikon hunting scopes (as opposed to high magnification target scopes) and that the rests we’re shooting off are only so-so, I would have been surprised if they had shot much better. My gut tells me that under more controlled circumstances these rifles will shoot very well indeed.

How about calibers? You’ll see in the photo above that my Renegade 2 is chambered in .308 Win. but this is not going to be one of the calibers initially offered. Instead, Thompson-Center is going do this in a long action at first, so we’ll be seeing it in .30-06., .270 Win., .243 Win and 7mm Rem. Mag for starters. But you can bet that a medium-length action will be in the Renegade 2’s future.

Now, it’s time to hunt and see how it does in the field.
_
–John Snow_