From The Bellingham Herald CHARLOTTE, N.C. A spirited and self-deprecating Sarah Palin fired up 9,000 members of the National Rifle... 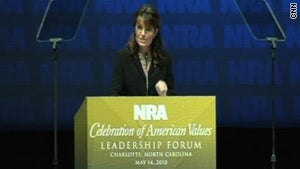 From The Bellingham Herald

CHARLOTTE, N.C. A spirited and self-deprecating Sarah Palin fired up 9,000 members of the National Rifle Association in Charlotte on Friday, bashing Hollywood, the media and animal-rights groups while warning that President Barack Obama would “gut” the Second Amendment.

The former vice presidential candidate led a parade of mostly Republican speakers who defended what actor Chuck Norris called “those 27 simple words” of the Second Amendment.

They made the NRA’s Celebration of American Values Leadership Forum at Time-Warner Cable Arena a pep rally for gun rights–with a decidedly partisan tilt.

But the star was Palin, who spoke for about 25 minutes.

“It’s so good to be with all of you ‘bitter clingers,’ ” she said to laughter, mocking Obama’s 2008 description of “bitter” people who cling to guns and religion.

“No need to load up the teleprompter,” she said while flashing a smudged palm, a humorous reference to a speech she’d given in which she had words written on her hand. “I’ve got everything I need written on the palm of my hand.”

In her first Charlotte appearance, Palin was greeted with repeated ovations and at least one T-shirt that read “Palin 2012.”

“Gun ownership is at an all-time high, violent crime is near a 30-year low,” she said. “The anti-gun groups, they don’t deal in common sense. They deal with emotionalism and lies.”

(Becca Knox of the Brady Campaign to Prevent Gun Violence argued in an interview that crime is low in part because background checks enacted with the 1994 Brady Law have stopped more than 1.8 million attempts to buy guns.)

“I have bad news for those groups,” she said. “Bambi’s mother is dinner – even in L.A.

“Where do those people think their venison comes from? The deer didn’t die of natural causes. It wasn’t road kill.”

Palin alluded to a landmark 2008 U.S. Supreme Court case that upheld gun rights in the District of Columbia. The court ruled 5-4 in favor of the NRA’s position.

“Elections have consequences,” she said. “If John McCain and I were in the White House today, that one-vote margin would be a two-vote margin and turn into a three-vote margin.”

She said Obama and other Democrats haven’t tried to push gun-control legislation because they fear a backlash.

“Don’t think for a minute if they thought they could get away with it they would ban guns and ban ammunition and gut the Second Amendment,” she said.

Palin, a hero to many in the tea party movement, criticized the way it has been covered by the “lamestream” media.

“It’s perverted how the media wants to portray these good Americans,” she said. “Some of these reporters try to portray tea party Americans as violent or racist or redneck – I don’t really have a problem with the redneck part.”

She then looked at her cell phone and read a series of redneck jokes.

“(But) the racism and extreme accusations, holy jeez, give us a break.”

For Palin, it was a friendly audience.

“And,” said her husband Paul, “she loves this country.”