Solicitor General Elena Kagan was easily confirmed Thursday as the next associate justice of the U.S. Supreme Court in a... 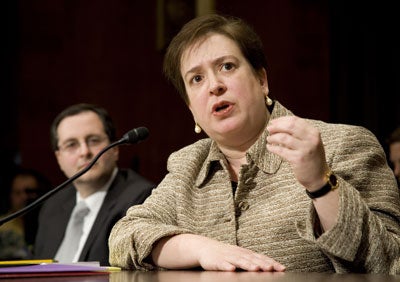 Solicitor General Elena Kagan was easily confirmed Thursday as the next associate justice of the U.S. Supreme Court in a 63-37 vote that, as expected, followed party lines.

Despite lobbying by the NRA and other conservative groups against her, Kagan’s nomination was virtually assured by the presence of 59 Democratic senators casting ballots.

Five Senate Republicans supported Kagan to succeed retired Justice John Paul Stevens. One Democrat, Ben Nelson (Neb.), was opposed. Kagan, a self-described progressive, is not likely to tilt the court in a different direction, given Stevens’ role as a leading liberal jurist the past three decades.

The five Republicans who supported Kagan were Sens. Susan Collins and Olympia Snowe of Maine, Lindsey Graham of South Carolina, Richard Lugar of Indiana and Judd Gregg of New Hampshire.

Second Amendment advocates are wary, if not outright opposed, to Kagan’s nomination because her views on the right to bear arms are not well articulated beyond a memo she wrote while working in the Clinton Administration that she was “not sympathetic” to gun owners’ rights.

While Kagan’s nomination is a set back, immediately after the Senate vote, Curt Levey of the Daily Caller wrote that Second Amendment advocates have “several things to cheer in the Kagan confirmation battle. Republican senators mounted their strongest opposition in more than century, sending strong signals to the White House about future Supreme Court picks, while teeing up important issues for this fallis Senate races. The confirmation fight also saw the continuing repudiation of the Leftis living Constitution philosophy and the solidification of a profound change in the politics of judicial confirmations wrought by the prominence of gun rights for the second time in two summers.”

Kagan is set to begin a lifetime position as the nation’s 112th justice. Administration officials anticipate she will sworn into office Saturday, August 7, when she takes the traditional constitutional and judicial oaths. She will then assume her court duties immediately.

– Kagan presents a test for the NRA as Senate confirmation assured;

– Gun rights will remain an issue for high court;

– How Would Justice Kagan Approach the Second Amendment?;