It was supposed to be a serious day of work at the range. I had just collected a brand new... 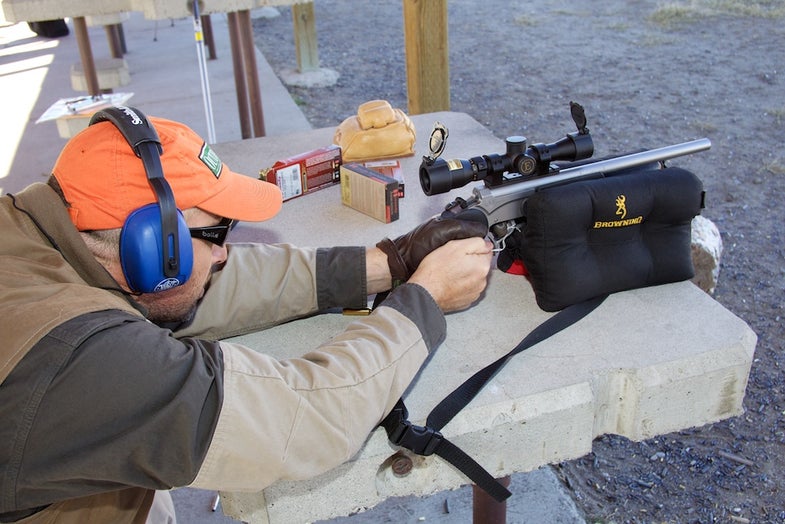 It was supposed to be a serious day of work at the range. I had just collected a brand new T/C Prohunter single-shot handgun from T/C’s custom shop chambered in the superb 6.5 Creedmoor, which has rocketed to the top of my list of favorite cartridges. (I now have three Creedmoors in my gun safe and if you think that were enough to satisfy my 6.5 sickness you’d be wrong–Darrel Holland is building me another on a 700 action that I’m hoping to have before Christmas.)

This T/C handgun, one of the first they’ve done up in this caliber, is destined to come along with me on a whitetail hunt in Kansas this December and I wanted to get it dialed in and gather some of the data I’d be needing for a full-blown evaluation.

Resting the forend in the snug V of my sandbag I shifted around to get the proper eye relief from the Nikon scope while bracing my support hand against the bench to steady the shot. I mentally checked the firmness of my grip, cocked the hammer, took a full breath, let it half out and started adding pressure to the trigger.

The first shots were low right. I adjusted the dials to give me two inches of elevation at 100 yards and put one right into the circle situated exactly two inches above the black box my crosshairs were on. Lovely. My next shot cut the hole of the previous shot.

Suddenly, shooting multiple 5-shot groups at 100 yards of each of the three loads I had with me was too dreary a task. I shifted the gun slightly to the right, centered the crosshairs on the 8-inch metal gong my range has set up at 200 yards and let fly. The 120-grain Hornady GMX bullet rocked the metal plate with a satisfying clang.

Another shift. Another gong, this one at 300. Without a chronograph I couldn’t calculate the exact drop but I figured about seven inches and that was good enough. Bang, clang.

At 400 yards the gong very nicely filled the circles in my BDC reticle but with the crosswind I had to hold on the left edge of the plate. I had misjudged the drop a hair, my bullet sailing just underneath at 6 o’clock. I put a bit more daylight between the top crosshair and the target giving the bullet two feet to fall into the plate, which it did on my next shot. Clang.

The last gong was at 430 yards, just 10 yards shy of the quarter-mile mark. I shifted the crosshairs up a bit more, positioning one of the circles in the reticle just to the left of the stout metal plate. Bang. Clang. Reload. Bang. Clang. Reload. I shot the rest of the box and most of another before calling it quits. I was grinning like a fool the whole way home.