Glock 23: My longtime pal gets a trigger job–finally 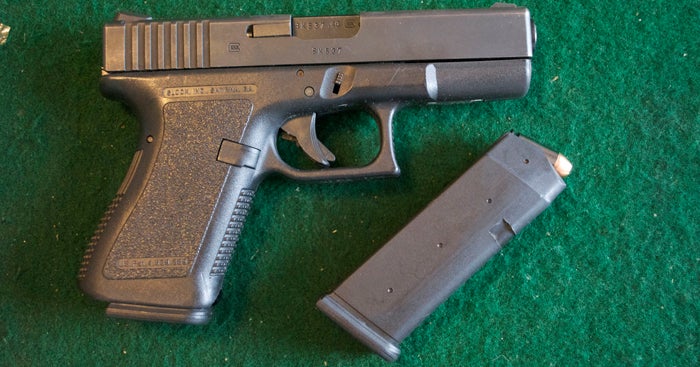 I’d like to say I haven’t neglected my Glock 23, but I’m not sure a jury of my peers would agree. I bought my 23 the first year it came out–whenever that was–back in late 80s. I was looking for my perfect carry gun and decided this was it and, corny as it sounds, I’ve been trusting it with my life ever since.

We’ve been pretty much inseparable over that time but like an old married couple at some point along the way I stopped paying much attention to it. In the first heady days of our romance I was a good partner. Right after I purchased the pistol I sent the slide off to Wayne Novak to get a pair of his low-profile sights with two-toned tritium inserts and I invested in a top-notch holster from Milt Sparks. With these two upgrades I figured I was good to go.

The sights have long since dimmed and I keep meaning to get them replaced but I haven’t gotten around to it and because I shoot the pistol just fine with the sights as they are I’m not sure I ever will.

I put a steady diet of rounds through it–mostly cheap practice ammo but I’d run a mag or two of the fancy stuff from time to time just to make sure it fed okay.

I have no idea how many rounds it’s shot but in all these years I can’t recall one misfeed, jam or other malfunction.

I never gave much thought to the trigger–which, looking back, kind of surprises me–because I’m a pretty hardcore trigger snob with all my other guns. It might have something to do with the fact that there were no replacement triggers made at the time and, like I said, I did a few upgrades to the 23, stuffed it in its holster and called it good.

But the other day I was hanging out at a buddy’s gun shop–he makes amazing AKs–and his main assistant, Eric, noticed my gun on my hip.

He carries a 23 as well–a much newer version–and is a Glock armorer. We pulled out our guns, racked out the rounds in the chambers, switched pistols and compared. As he dry-fired mine a look of horror came across his face. He didn’t so much ask me as told me that he was going to do a trigger job for me then and there.

He happened to have a replacement 3.5-pound trigger–the Ghost Rocket–on hand. (Which you can get from Brownells, of course.) He installed it, adjusted the trigger reset and handed it back.

It felt like a whole new gun, I have to admit. I took it to the range later that day and put 100 rounds through it, marveling at the easy pull and fast reset. With the 180-grain Hornady TAP ammo, the 23 still bites–it always will–but my good gun, and faithful companion, just got better.

To click here to see more photos of my glock 23.