Idiots With Guns: Three Videos Demonstrating What Not to Do With a Firearm

This video is either a reenactment of the Battle of Britain set to mandolins or a bunch of drunken idiots... 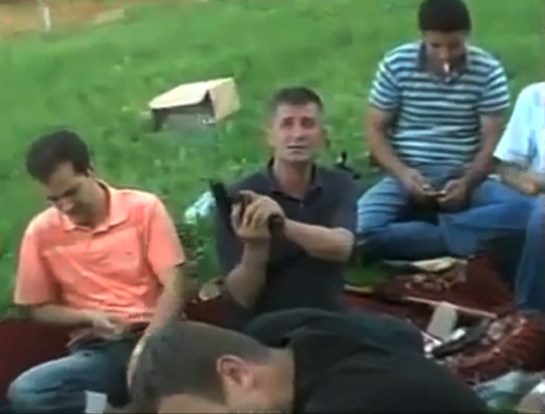 This video is either a reenactment of the Battle of Britain set to mandolins or a bunch of drunken idiots who have no business handling guns. Or maybe it is both.

The love that foreigners seem to have for expending ordinance skyward is a frequent Youtube theme but the rapid-fire technique in this video where the shooter rattles the index finger of his off-hand back and forth in the trigger guard was new to me. It reminded me of a cowboy cook flailing at a metal triangle to call the hands to dinner. Chalk one up to Eastern European ingenuity.

I’ve seen a few examples of bad gun behavior starring Americans–one Internet classic is the guy who thought it would be smart to shoot a .600 Nitro Express pistol.

But the most cringe-worthy has to be Mr. “I’m the only one professional enough in this room to carry this Glock .40” DEA agent who puts a bullet through his foot while lecturing a classroom of kids on gun safety.

You can’t make this up–and if you did, no one would believe you.