New Gun Round Up: Barret 82A1, Traditions Evolution and Pursuit Ultra Light

Here are a number of new products being offered up for shooters. Barret is offering uppers to convert your Model... 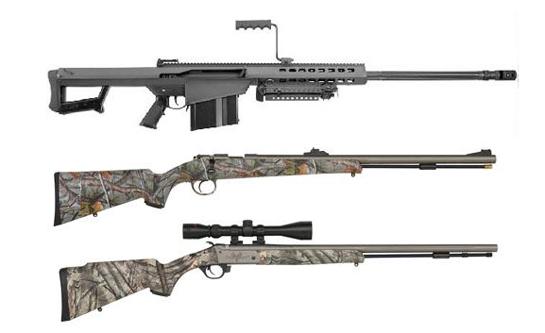 Here are a number of new products being offered up for shooters.

Barret is offering uppers to convert your Model 82A1 series rifle (top) from one caliber to the next. I can’t picture any reason you’d need to switch from a .50 BMG to a .416 Barrett but, by golly, you can if you want to. (As a side note I’ve shot this rifle in .416 Barrett–suppressed, no less–and pulling the charging handle back on this beast is a near religious experience. When that bolt slams forward putting a shell into battery it is like you’re arming the Fist of God. There’s no surer sign that something downrange is about to experience a world of hurt.)

Beretta has come out with some pretty leather holsters for both right- and left-handed shooters for the Model 92 and PX4 pistols. Given that these are made in Italy, I’m surprised that they were able to keep the price to $49.

Traditions has announced a couple new muzzleloaders, the Evolution (middle) and the Pursuit Ultra Light (bottom). The company says the Ultra Light weighs but 5.15 pounds, which would make it great for hauling long distances but not so much fun at the range.