If you want to be successful at 3-Gun competition you have to be fast with your pistol, accurate with your... 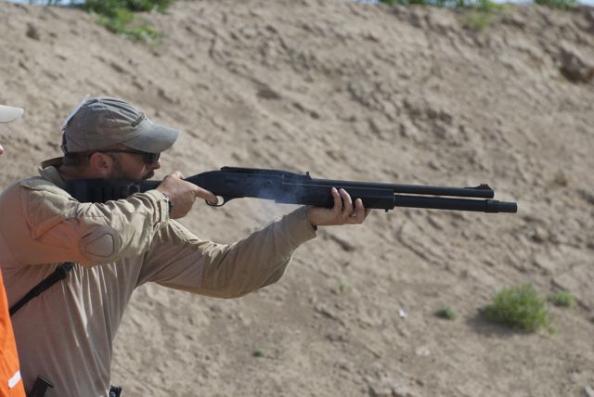 If you want to be successful at 3-Gun competition you have to be fast with your pistol, accurate with your rifle and be able to load your shotgun in the blink of an eye.

As far as my shotgunning goes, I’m not that fast. The time I take to stuff 8 shells into my magazine qualifies more as a prolonged stare than a blink but I’m determined to get quicker.

Pro shooter Sterling White told me about a drill he uses to improve his loading speed and given that he just posted a top-20 finish in the Tactical Scope division at the MGM Ironman in June, I’m inclined to take his advice. (For the record, I finished 98th in that same division, the equivalent of a collegiate gentleman’s C.)

Before getting into the drill, you need to get a handle on the basic method for loading shotshells into your gun. Every serious shooter uses shell carriers that hold multiple shells. Most of them hold four, which is the amount you can grab in your hand at once, though some styles hold more.

Assuming you haven’t run your shotgun dry, the trick is to grasp four shells at once, pinching them between your thumb on one side and your index and middle fingers on the other as you pull them out of the carrier. The brass head on the shotshells should rest against the inside of your ring finger, to keep the shells nicely stacked.

With as smooth of a motion as possible, feed the shells one after another into the magazine. As the thumb pushes the top shell into the magazine, roll the next one into position to get it ready to be loaded. You’ll be able to control the gun better if you pinch the butt of the shotgun between your arm and chest.

Using this loading technique, try this drill, which requires use of a shot timer. Load two shells in the gun and eight shells into the carriers on your belt. Set the par time for 15 seconds to begin with. Start with the shotgun in a high ready position and when the buzzer sounds shoulder the gun and fire one shot. Lock the butt of the shotgun under your arm, load eight shells as fast as you can, bring the gun back to your shoulder and fire a second shot to stop the clock.

“The good thing about this drill is that you can do it multiple times with a single box of shells,” White says.

The first milestone is to get the spread between the first and second shot under 10 seconds. Once you master that, aim to do it a second quicker.

“If you can get it to seven seconds or less, you’re doing great. If you can do it in five seconds, I’ll buy you a beer,” White says.

I did the drill 21 times at my gun club the other day. My average split time between the two shots was 11.49 seconds, with my best time coming in at 9.60 seconds. My best five times averaged 10.26 seconds, all of which occurred during the last 10 times I did the exercise, even though I was feeling fatigued by then.

I’ll try to do it at least once every week or two and post my times here. With any luck, I’ll get it under 10 seconds in the near future.

Doing this from a static position is fine and is the right way to start, but once the loading starts to feel more fluid, I’ll add movement into the drill using a system Todd Jarrett taught me called the Devil’s Triangle. More on that later.