For the first time ever, gun buyers can own the very same sidearm that SIG SAUER provides to the Naval... 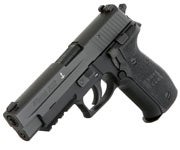 For the first time ever, gun buyers can own the very same sidearm that SIG SAUER provides to the Naval Surface Warfare Center, which oversees the Navy SEALs among other elite military units.
The SIG SAUER P226 was the NSWC’s sidearm of choice for over two decades. It was recently upgraded and recast as the MK25. Shortly thereafter, the Navy granted SIG SAUER permission to sell the Navy’s new MK25 to the general public. That’s right, the now commercially available MK25 is identical to the firearm SIG SAUER delivers under contract to NSWC.

Built to the Navy’s demanding standards, the MK25 comes chambered in 9mm, with a phosphate finish applied to all internal components to provide corrosion resistance in even the harshest of saltwater environments. A reliable double-action/single-action trigger and two-piece polymer grips are included in the NSWC-specification package. SIGLITE® night sights, three 15-round magazines (where legal) and a card certifying authenticity comes standard in the case.

The true mil-spec 1913 rail is machined into the hardcoat anodized alloy frame, providing a solid mounting point for lights, lasers and accessories. The pistol weighs 34.4 ounces and a gold anchor is engraved on the pistol’s slide!