TOP SHOT: How to Communicate With Your Spotter

Editor’s Note: Tim Trefren is a hunting guide from Wyoming and a competitor on Top Shot, the History Channel’s reality... 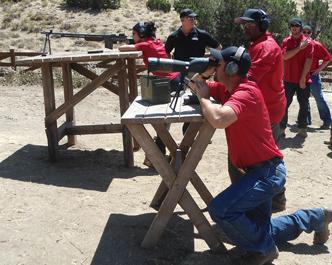 Editor’s Note: Tim Trefren is a hunting guide from Wyoming and a competitor on Top Shot, the History Channel’s reality tv show about marksmanship. Each week Tim will blog about the most recent episode offering insight and shooting tips.

In the second Top Shot competition the teams walked up to the practice range to see that we were going to be competing with the B.A.R. (Browning Automatic Rife). With targets ranging from 100 to 200 yards, the key to winning this challenge was going to be how well the spotter could communicate with his shooter.

Going through practice, it became clear that I was the best on the spotting scope (after all, I’ve spent years behind the scope guiding hunters). That being said, most shooter/spotter relationships are built over long periods of time, sometimes even years.

The good folks at the History Channel set up a WWI simulation with barbed wire, explosions, and lots of flames. There was a four-foot deep trench with the B.A.R. The spotting scope was set up 40 feet away. I had to scramble under the wire and get into position to take my shot, and then get setup on the scope for the next shooter.

In this harsh environment, both teams had a lot of trouble with shooter/spotter communications. As i was trying to walk our second shooter into the target I called out where his shots were hitting and he thought I was calling out where he should be holding. After several shots down range, I explained I wasn’t calling out holds and after only a few more shots Keith was able to connect with his target.

And then Gary dropped into the pit and started banging away. Gary and I communicated much the same way and were able to get a hit on the target after only a few shots. Knowing that we were behind in the challenge, the pressure was building on the rest of the team. Gabby dropped into the trench and I started calling out the shot hold to her before she started shooting.

She was able to pick up on what I was saying and after two short bursts she nailed her target.

One of the worst things that can happen to a shooter is to have several people trying to call shots. The blue team did this as Terry was firing, and he got so frustrated with the confusion of all the directions he was getting that he stopped shooting and asked for one spotter.

That was a critical mistake that was almost big enough to let my team catch up. And then Kyle dropped into the trench and quite honestly, I am not sure what happened. I think with all of the pressure of being behind and the noise, he wasn’t able to hear me. It was the red team’s fatal mistake.

Finally after several magazines down range I was able to get Kyle to hear me and make the shot, a little too late. There was a break down in communication, the single worst thing that can happen to a team. The red team lost the challenge but we took a very valuable lesson: the most important thing for our team is communication. We will never have the same relationship as a sniper and spotter or a long range competitor and spotter. Those teams work together for years and can almost finish each others sentences.

They have a trust that goes beyond shooting, they are partner, friend and closest ally. One of the things that I learned was to never take for granted how I communicate. Just because I am telling the shooter to do something, it doesn’t mean that he or she is hearing it the same, so I need to be flexible with my instructions.

As a shooter and his spotter work together, they begin to pick up each others actions. The spotter knows when the shooter is going to shoot without being told and the shooter knows how long it should take for the spotter to get on target. That comes from nothing more than practice, practice and more practice. I do the same thing in my guiding profession with my clients. when a client is about to take a shot, it is my job to call out hold and then talk to him with a calm, unexcited voice and take him right through the shot.

Over the years I have found that this is the best way to eliminate “buck fever” without stress and without excitement. Think about this relationship the next time you head to the field or shooting range with your hunting buddy.

Thanks for reading and check back next week for more. Be sure watch Top Shot every Tuesday at 10/9C on the History Channel.