TOP SHOT: How to Make The Most Important Shot of Your Life

Editor’s Note: Tim Trefren is a hunting guide from Wyoming and a competitor on Top Shot, the History Channel’s reality... 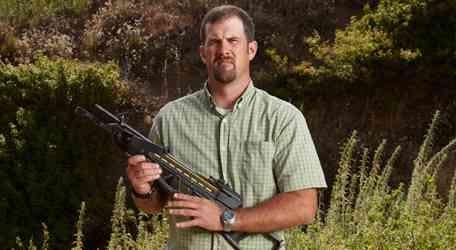 Editor’s Note: Tim Trefren is a hunting guide from Wyoming and a competitor on Top Shot, the History Channel’s reality tv show about marksmanship. Each week Tim will blog about the most recent episode offering insight and shooting tips.

The first episode of Top Shot was one hell of an experience for me. We were quickly informed that out of the initial group of 18, two shooters would be going home before the show even really started. We would each get one shot from 200 yards with an M14 (open sights). The two shooters who were farthest from center would be sent home.

This would be the most important shot of my life.

Luckily we each got two practice shots before taking the big one that would be scored. Without being able to familiarize myself with the rifle, or having the option of moving the sights, I was going to have to make the most of my two practice shots. I made the decision to shoot both practice shots in the same place rather than shoot, compensate and then shoot again. The strategy was to try to establish a group and then hold over for some “Kentucky windage” on my third shot that actually counted for my score.

After waiting on that damn bench in 100-degree heat for over 8 hours, Colby, the show host, finally called “Tim Trefren a big-game hunting guide from Wyoming.” The whole world seemed to slow down and go quiet. The only thing I heard after that was Keith Gibson, a fellow competitor, say “shoot for the vitals.”

As I was walking to the firing line all I thought about was fundamentals: breath, maintain as many points of contact with the rifle as possible, breath, slow your heart rate, breath, maintain focus, breath, let a half breath out, squeeze the trigger, don’t jerk, squeeze, follow the shot through, BREATH again or you’re going to pass out. And last of all its not life or death it’s a damn T.V. show so enjoy it!

With the hunting experiences I’ve had shooting rifles at longer ranges, I knew I could make this shot, I just had to keep it between my ears and I would be fine. So I got to the line, laid down behind the M14, took a few seconds to calm the nerves and then let’er rip. Then the came the waiting game to see if I actually made the show. It only took a few moments for my measurement to be called, but it whittled years off my life. Finally: 2.02 inches from the center and I’m in 4th place! I made the most stressful shot of my life count!

The trick to making a shot like this is to not over think it. I knew I had the ability; I just needed to make sure I didn’t let my nerves didn’t get in the way. To do this, I focused on fundamentals and literally concentrated on each breath I took.

With two world champions going home on the very first day it really began to sink in just how hard this was going to be. I realized that it wasn’t going to be about who was the best shot, but rather who’s the best marksman. To win, I needed to keep my cool, not beat myself, have ice in my veins, be a great shot, and never have a bad day.

Let me pause here and say that Craig Buckland and Forrest McCord are two of the finest competitors I have ever met. And yes they held their heads high.

So after the initial challenge, we were split in to two teams and I made the Red Team (that’s right, can I get some love for the RED TEAM NATION). Let the rest of the show begin!

Thanks for reading, feel free to comment, and check back next week for more inside-information on Top Shot, airing Tuesdays at 10/9c on the History Channel.