According to ScienceDaily.com, between 8 to 15 percent of the adult population is left-handed. Which translates to tens of thousands... 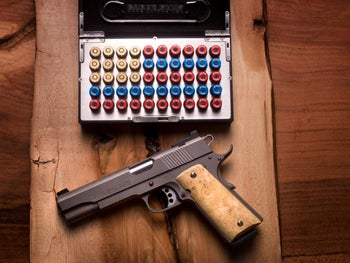 According to ScienceDaily.com, between 8 to 15 percent of the adult population is left-handed. Which translates to tens of thousands of left handed shooters. Enter the Cabot Gun Company and their new South Paw, a 1911 in .45 ACP made specifically for leftys.

“Our Southpaw ejects to the left away from the shooter,” explains Rob Bianchin, President of Cabot Gun Company. “Typically, if you hold a standard 1911 in your left hand, and the shells come out on the right side of the gun, they can hit you in the head–or worse yet, fall down the back of your shirt!”

The safety and magazine release are also “flipped” to the other side of the 1911 frame.

Says Bianchin, “Since a left-handed person has spent all their life using their left hand more than the right, the muscles are built up more in their left hand. So, with the thumb safety, magazine release, and slide stop on the opposite side of where they are on a standard 1911, the left handed shooter will be able load and eject the South Paw magazine easier and more naturally.”

The South Paw also features a new front sight, the Rozic blind sight. Rather than staked from the top of the slide, the sight dovetails from the front of the breach face providing seamless integration into the slide. The sights are available with white dot, tritium or gold dot. 100 percent made in the U.S.A.