I recently spent over a week hunting hogs in East Texas in conjunction with the Wild Hog Roundup sponsored by... 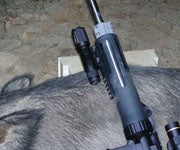 I recently spent over a week hunting hogs in East Texas in conjunction with the Wild Hog Roundup sponsored by Wulf Outdoors Sports of Center, Texas. Arriving from chilly Wisconsin, the 80-plus degree temperatures were a welcome change. But it took a couple days of hunting to realize the daytime heat was driving the hogs into the vegetation-choked creek bottoms. Night hunting was in order if I was going to bag a wild porker.

So the good folks at Wulf offered to let me use a Nite Hunter Varmint rifle-mounted lighting system: Model NHV-001, a 160 lumens green LED light that mounts onto your optic or rifle. Using two different AR-style rifles, I mounted the light on the Picatinny rail below the barrel.

I was surprised at how well the Nite Hunter Varmint worked. I had no problem picking up wildlife — from rabbits and armadillos to hogs — out to 125 yards or better. Hog eyes were reflected at a good 250 yards, too.

On the second night of using the Nite Hunter Varmint, I took a 200-pound boar I spotted while walking back to camp. The hog was feeding alongside the logging road when I caught the gleam of his eyes in the green light. Initially, he faced me, and then he headed down to forage some 70 yards ahead, unaffected by the green light shining in his eyes. I fired when he turned broadside, taking him down with a single shot from my ArmaLite AR-10(T) in .308 Winchester.

This was my first time using a green light. The most important thing I learned is that the Nite Hunter Varmint light works best in conjunction with a top-quality scope. For example, I hunted with a red/green dot optic atop my rifle the first night. The optic performed fine during the day (as I proved on the shooting range) but something about the green night light created an opaque reflection in this optic that limited my vision to maybe 40 yards.

The next night, I equipped my rifle with a Leupold VX-R Hog 1.5-4x20mm scope. The difference was, well, night and day. Where my vision had been cloudy to non-existent with the red/green dot, I could now pick out individual bushes, the edges of trails, and the head and body of a nice-sized boar with the VX-R Hog scope.

I also realized that any vegetation within four or five feet of my light caused a reflection that greatly diminished my visual reach. I began each night’s hunt from a deer stand, and some pine boughs that stood well below the shooting window reflected back enough green light to cause a glare off my scope. I saw just fine once I cut back the boughs.

The Nite Hunter Varmint comes with an on/off clicker and a pressure switch, a rechargeable battery and charger, a 1″ scope mount, a 30mm scope mount, a Picatinny rail mount and the necessary Allen wrenches to attach the mounts. The battery life is rated at seven-plus hours with a full charge. Because the light is an LED, it works well in cold weather, too.