If you want to take your clays game to new levels, consider upgrading your favorite double-barrel target gun with a... 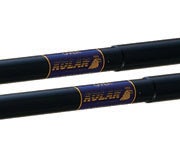 If you want to take your clays game to new levels, consider upgrading your favorite double-barrel target gun with a sub-gauge tube set.

A tube set is a pair of thin, free-floating shotgun barrels that slide into the factory barrels of a larger over/under or side-by-side, most commonly a 12-gauge. These allow you to shoot smaller gauges from that gun.

The advantages of sub-gauge tubes are many, including lower reloading costs and the fun you’ll have dusting clays with the featherlight recoil of 20s, 28s, and .410s.

Kolar Arms in Racine, Wisconsin, and Briley Manufacturing in Houston, Texas, are both big players in the tube-set market. They’ll hand-fit tubes in all the common sub-gauges to just about any popular double barrel. The process takes three to four weeks and runs $500 to $700 per gauge, chokes included.

If you plan to shoot .410 loads and your gun has inertia triggers, you’ll need to have the inertia block modified so that the trigger will reset to the second barrel after the first shot. Briley and Kolar both offer that service.

If you want only 20- or 28-gauge or can’t part with your gun for that long, consider Briley Companion Tubes. These drop-in sets are pre-made for popular shotgun models and are priced comparably to fitted sets. They can even be used in most other guns of the same make and barrel length. The downside is that they aren’t hand-fitted. A plastic “button” friction-fits them in place, and the hold usually isn’t as strong as with a fitted set.

A tube set adds from about 10 ounces to a pound to the gun, which changes the balance point. It takes some tweaking, but get the balance right and, for less than the price of a second high-end target gun, you can convert one gun into several.