My Plano AW Gun Case went through a field test in the unlikeliest of places: the airport. I watched as... 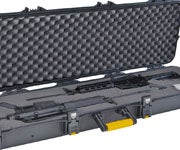 My Plano AW Gun Case went through a field test in the unlikeliest of places: the airport.

I watched as the case poked its nose out onto the baggage carousel, came down the conveyor line and immediately got hung up on the very tight corner. With 30 people between me and the case, I couldn’t get there before a suitcase gave it a bump — my gun case slid off the line, dropped a foot and a half and slammed hard onto the floor.

The results of the test, though, were not apparent until the next day, when I took my two rifles to the shooting range. They were fine and the scopes still dead on. In addition to that drop from the baggage conveyor belt, my guns were transported a lot lately. God knows how badly they’ve been bouncing around in the bellies of the three separate airplanes it took to get me from Wisconsin to East Texas for a hog hunt.

The Plano AW Gun Case, model 108190, is made to hold two scoped rifles or a pair of shotguns. It’s part of Plano’s All Weather series, which incorporates Plano’s continuous Dri-Loc® seal to keep the case watertight, airtight and dust-proof. Plano’s molded construction is rugged and durable, and the case is equipped with a pressure relief valve, too.

High-density foam in the lid and bottom afford padded protection for your firearms. There are six dual-stage, spring-loaded latches on the outer perimeter of the case. Not only do the latches secure the contents on the inside, they also pull the case tight against the seal to keep the elements on the outside. Two of the latches are lockable with keys.

Finally, the gun case has two wheels so you can pull it along. The wheels work fine on smooth, hard airport but–my only criticism of this otherwise fine gun case–they can catch and tug on surfaces like an uneven parking lot. I wonder if slightly larger diameter wheels might work better.