Nick D’Arcy and Kendrick Monk are swimmers on the Australian national team. While training for the upcoming London Olympics in... 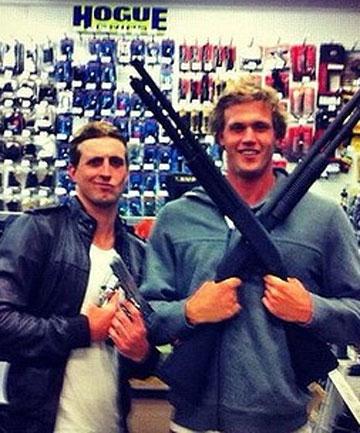 Nick D’Arcy and Kendrick Monk are swimmers on the Australian national team. While training for the upcoming London Olympics in Southern California in early June, they visited a Los Angeles-area gun shop, posed for photos with firearms, and posted the photos to their Facebook and Twitter accounts.

Guns are a novelty in Australia. When visiting the U.S., Australian tourists occasionally pose for pictures in gun shops. That’s what D’Arcy and Monk, both 24, were doing when they posted their requisite USA “gun shots” online — acting like typical, young Australians visiting America.

Undoubtedly, neither expected to ignite a controversy. Now, the Australian Olympic Committee has banned both from use of any use of social media until after the Olympics, and will require they return to Australia when they finish their events in the first week, rather than stay with the team for the full games.

“While what the boys did was not illegal, posting the photos on social networks encourages public debate, and that debate can be seen to have a negative impact on the image of the sport and their own image,” said Kevin Neil, chief executive officer of Swimming Australia, the Australian Olympic Committee’s regulating body for aquatic sports.

Not much to interpret in these remarks: Anything that “encourages public debate” about anti-gun hysteria is not to be tolerated.

Australians have reacted with varying levels of head-scratching chagrin, wondering what would happen if a marksman on the Australian Olympic shooting team posed for pictures in a swimming pool and posted them on Facebook and Twitter.

Robert Katter, a member of Australia’s House of Representatives, has sharply criticized the Olympic committee and Swimming Australia.

“What have we become, when two Australian Olympic Swimmers can be vilified for being photographed with legal firearms in the US?'” he asked in a June 12 interview in The North West Star. “Are we serious? The real crime here is the ‘thought police’ stripping us of the right for boys to be boys. Will they finally be happy when men can only be photographed at a day spa carrying their designer Chihuahua in a designer Louis Vuitton doggy handbag? It’s about time men stop being made to feel like they should apologize for being men.”

For more, go to:
— Social media ban for gun-toting swimmers

— Danger ever present in social Games