Think you’ve got your AR tricked out with every possible accessory? Think again, because I bet you don’t have a... 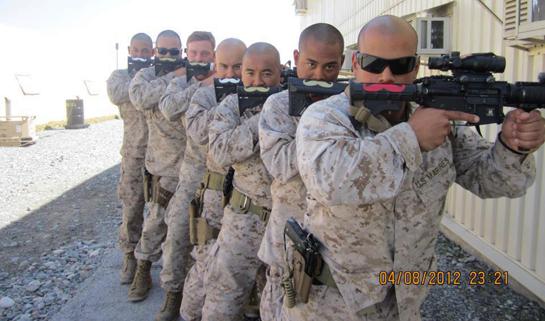 Think you’ve got your AR tricked out with every possible accessory? Think again, because I bet you don’t have a Rifle Stache taped to your buttstock.

Best we can determine, the Rifle Stache first came to light this May, with a Facebook-posted photo of seven Marines, their M4’s shouldered and their moustaches on. That photo was posted to the Facebook site of JMC Custom Holsters of Ocala, Florida.

Sometime after this, “Monkey,” one of the Four Gun Guys, posted his own Facebook pic of himself and his AR with a blue ‘Riflestash’ affixed. Now, the Four Gun Guys, a website that tests and critiques a variety of firearms, actually sells Riflestash appliques at $5 for a sheet of four.

“We just started selling these about a week or so ago, and so far they have done quite well!” says “Superbowl,” another of the Four Gun Guys.

What do you think Gun Shots fans? Will you be sporting a Riflestash any time soon?