I had a chance to shoot Mossberg’s new entry into the AR market recently, the MMR Tactical semi-automatic rifle, during... 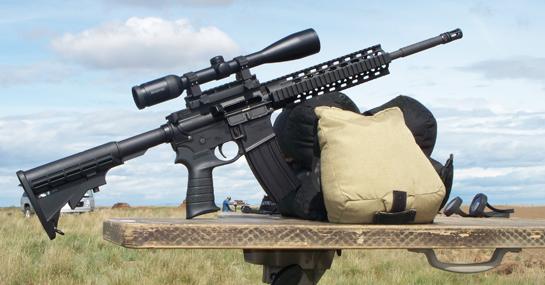 I had a chance to shoot Mossberg’s new entry into the AR market recently, the MMR Tactical semi-automatic rifle, during a three-day varmint hunt in Eastern, Oregon. All told, I put more than 700 rounds through the MMR, and I found it to be fairly accurate, dependable, and a lot of fun.

With a price tag of $800 (on the Internet), it is a rifle I’d have to seriously consider if I was looking for a new tactical hunter.

The MMR Tactical is chambered in 5.56 NATO (.223 Rem.), and operates via a direct-impingement gas system. The 16.25-inch, free-floating barrel is button rifled, with a 1 in 9 twist. It has a formidable-looking aluminum picatinny quad-rail forend, vented for quick cooling, and an A2-style muzzle brake. The rifle I had came with a six-position adjustable butt stock, though it can also be had with a fixed-position stock. It does have a dust cover, though no forward assist.

The MMR was topped with a Swarovski Z5 scope, an optic with a one-inch tube with a magnification of 3.5-18×44.

The MMR I used was new — right out of the box new. Mostly, we were shooting ground squirrels at distances ranging from 70 yards to 300 yards. The ground squirrel is not a large target. Imagine a furry corn dog, sitting upright at 200 yards, ready to dart away at a moment’s notice. My first hour with the MMR was spent generally missing the little varmints. Part of that was due to me and the newness of the rig I was using. Part of it, too, must be credited to the rather rough single-stage trigger.

The trigger did get smoother as I passed 50 rounds, and better as I passed 100 rounds. And I also started to figure out just how much slack there was to take up in the trigger, and that helped my accuracy considerably. But the trigger is not adjustable, and if I was actually buying the rifle? I’d be looking for an after-market trigger to drop in.

Linda Powell, Mossberg’s director of media relations, says Mossberg made the decision not to manufacturer the MMR line with adjustable, precision triggers. Having such a trigger would’ve pushed the suggested retail over $1,000. Also, says Powell, “The Company knows that most AR-15 purchasers customize their rifles after purchasing, and triggers are typically the first component changed.”

In 700-plus rounds, I had one jam up. I don’t know if that was the fault of the rifle or the specific round. I know I didn’t so much as squirt some gun oil into the action the whole time, and the MMR keep shooting and ejecting with ease.

All in all, the MMR’s an impressive rifle. It comes with or without open sights. In 2013, Mossberg will add a .308 Win. version to the MMR line.