When Kim Rhode, then 17, stood on the podium at the 1996 Olympic Games in Atlanta with her first gold... 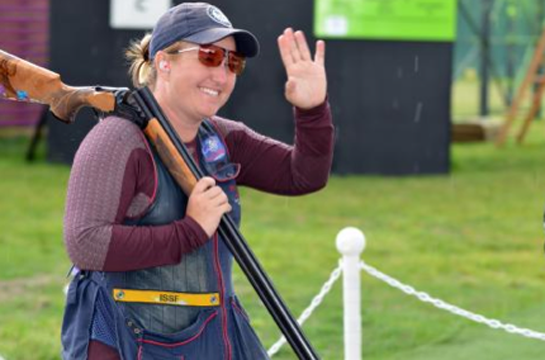 When Kim Rhode, then 17, stood on the podium at the 1996 Olympic Games in Atlanta with her first gold medal hanging from her neck, she never dreamed 16 years later she would make history in London at the 2012 Summer Olympic Games, but that’s exactly what happened this morning.

Rhode, 33, set a new Olympic record in qualifying for Women’s Skeet with 74 hits out of 75. She went on to match her own world record with a perfect 25 in the final for a total of 99 out of 100, winning the gold.

She is the first U.S. athlete in history to medal in an individual sport at five consecutive Olympic Games.

Before today, Rhode had collected two gold medals in the Double Trap event in 1996 and 2004, a bronze in 2000 and a silver in the Skeet at the Beijing 2008 games, cementing herself as one of the best competitive shotgun shooters in the world. And she’s not done yet.

“I do not see myself quitting any time soon,” Rhode says on the official Olympics website. “I’m looking forward to 2016 and a few more after that. The oldest Olympic medalist was a shooter and he was 72, so I still have a few more in me.”

That means continuing her intense training schedule. Rhode shoots as many as 500 to 1,000 shells a day and has continued a dedicated practice routine for 23 years. She estimates she has fired as many as 2 million shotshells in her life.

Stay tuned for more updates on the USA Shooting Team.